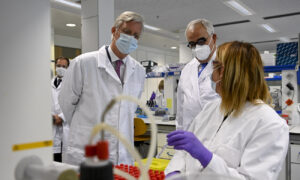 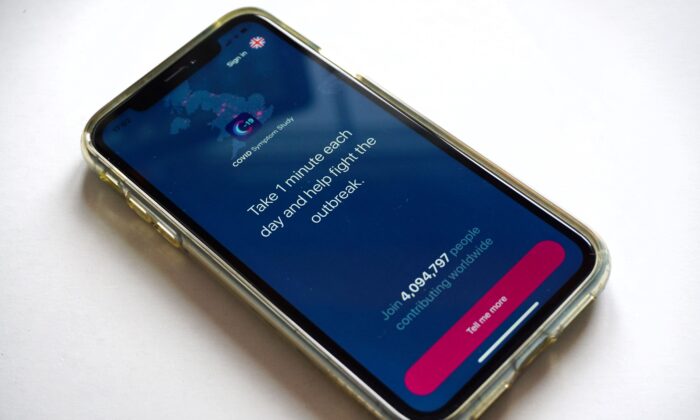 The COVID-19 Symptom Study app is shown on a mobile phone in an arranged illustration in London on Aug. 19, 2020. (Adrian Dennis/AFP via Getty Images)
UK

The government on Wednesday warned of the “potentially devastating long-term impact” of the CCP virus on health as a film about “long COVID” is released as part of its national Hands Space Face campaign.

Symptoms of long COVID, which can linger long after initial infection with the disease, include protracted loss of taste or smell as well as respiratory and cardiovascular symptoms, the government said in a statement.

They can also include chronic fatigue, “brain fog,” and mental health problems such as anxiety and stress.

In the “emotive” film about long COVID, two women and two men between the ages of 22 and 48 describe breathlessness on exertion, chest pain, and recurring fever weeks and months after catching the virus, the government said.

One of those featured in the film said via the government that it’s a mistake to think being “young and fit” will protect you from long COVID.

Another said she had suffered recurring and “overwhelming” symptoms since catching the virus in March.

A third, a 22-year-old, said she has not been able to work for seven months and fears for her future if she doesn’t fully recover.

Health Secretary Matt Hancock said that “irrespective of the seriousness of the initial symptoms” the virus can have serious “long-term” effects on individual health.

He added that people meeting “in large groups or not social distancing” run the risk of causing a higher incidence of long COVID in the population.

He said the film should act as a “stark reminder to us all.”

Meanwhile, the government said, a new study from Kings College Cambridge based on data from the ZOE COVID Symptom Study app has shown that 10 percent of 18- to 49-year-olds who catch the virus may experience long COVID symptoms.

The government said figures from the Hands Face Space campaign revealed uncertainty among the population around how long virus symptoms could last.

It also said the campaign had found that around a third of 18- to 34-year-olds didn’t realise you could have the disease—and potentially pass it on—without having symptoms.

Hancock said this showed how key “the three essential behaviours” were to reducing transmission.

The long COVID concerns come as Britain announced on Tuesday that it plans to be the first country to vaccinate healthy volunteers with COVID-19 vaccine candidates, then deliberately infect them with the virus, in “human challenge” vaccine trials.

The vaccine trials will then compare the effects of different virus candidates on the volunteers and pinpoint any side effects, the government said in a statement.

The up to 90 volunteers expected to initially take part will be healthy 18- to 30-year-olds who will be paid for their participation, it said.

Vaccines that have “proven to be safe in initial trials” will be used and, if approved by regulators, will begin in January 2021.

Results will be expected in May 2021.