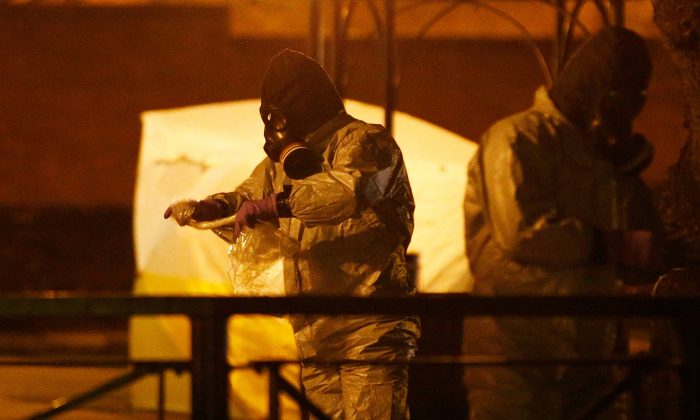 LONDON—Britain is to kick out 23 Russian diplomats, the biggest such expulsion since the Cold War, in the wake of a chemical attack on a former Russian spy in southern England.

Prime Minister Theresa May pointed the finger of blame firmly at Russian President Vladimir Putin on Wednesday as she outlined a series of retaliatory measures in parliament.

Russia denies any involvement in the attack on ex-spy Sergei Skripal and his daughter Yulia, who have been critical in hospital since they were found unconscious on March 4 on a bench in the southern English city of Salisbury.

May announced measures including the potential freezing of Russian state assets that pose a security threat, new laws to counter hostile state activity and a downgrading of Britain’s attendance at the soccer World Cup in Russia.

She had given Moscow until midnight on Tuesday night to explain how the Novichok nerve agent came to be deployed on the streets of Salisbury, saying either the Russian state was responsible or it had lost control of a stock of the substance.

“Their response demonstrated complete disdain for the gravity of these events,” May said in a statement to parliament. “They have treated the use of a military-grade nerve agent in Europe with sarcasm, contempt and defiance.”

May said the only possible conclusion was that the Russian state was culpable for the attempted murder of the Skripals and the harm to Nick Bailey, a police officer who is in a serious condition after being exposed to the nerve agent.

The Russian embassy in London described the steps announced by May as “unacceptable, unjustified and shortsighted”. Moscow has repeatedly warned London to expect retaliation.

Britain, which has received statements of support from the United States, the European Union and NATO, has said it would seek to coordinate an international response to the attack.

German Chancellor Angela Merkel said after May’s statement that she took the British findings on Salisbury seriously and there would be a common European stance, although “we must still talk responsibly” with Russia despite differences of opinion.

A French government spokesman said Paris was awaiting proof before deciding if it would act in solidarity with London.

May said the Organisation for the Prohibition of Chemical Weapons has been notified of Britain’s findings and would verify its analysis of the substance used in the attack.

Skripal betrayed dozens of Russian agents to Britain before being arrested in Moscow and later jailed in 2006. He was freed under a spy swap deal in 2010 and took refuge in Britain.

The attack on him was likened in Britain to the killing of ex-KGB agent Alexander Litvinenko, a critic of Putin, who died in London in 2006 after drinking green tea laced with radioactive polonium 210. Russia refused to extradite the two Russians identified by Britain as the killers.

Britain’s response to the Litvinenko affair, which included the expulsion of four Russian diplomats, was widely criticized domestically as too weak, and many in British politics and media have called for a much tougher response to the Skripal attack.

May said the 23 diplomats, identified as undeclared intelligence officers, had one week to leave and this would damage Russian intelligence capabilities in Britain for years.

It was the biggest single expulsion of Russian envoys from Britain since 1985 when 31 diplomats from the former Soviet Union were told to leave.

May also said Britain would revoke an invitation to Russian Foreign Minister Sergei Lavrov to visit the country and suspend all planned high level bilateral contacts between London and Moscow. The Foreign Ministry in Moscow said Lavrov had not accepted the invitation to visit Britain anyway.

On the soccer World Cup, May said no ministers or members of the British royal family would attend.

But unlike when the United States and European Union imposed sanctions on Russia in response to its annexation of Crimea and other actions in Ukraine, May did not name Russian individuals or companies that would be specifically targeted by sanctions.

“We will freeze Russian state assets wherever we have the evidence that they may be used to threaten the life or property of UK nationals or residents,” she said, giving no further details.

She said new laws would be urgently developed to counter any threat from a hostile state, including a power to detain those suspected of hostile state activity at the UK border.

She also said there would be an increase in checks on private flights, customs and freight to better track those traveling to Britain who could represent a security threat.

She also threatened action against those she described as “serious criminals and corrupt elites,” adding: “There is no place for these people, or their money, in our country.”

London has been a venue of choice for many rich Russian to buy property and has sometimes been nicknamed “Londongrad”.

This has long frustrated anti-graft campaigners, who want Britain to act more robustly against money laundering in London.

Russian gas giant Gazprom will cut hundreds of jobs at its overseas trading and export offices, including Britain where it has its largest such office by far, and move them to St Petersburg, as part of a drive by Putin to repatriate capital to reduce exposure to sanctions, according to two sources familiar with the plan who spoke exclusively to Reuters.

In a separate development, British media regulator Ofcom said it could strip Russia Today, a Kremlin-funded TV channel, of its UK license. Russia said British media would be expelled in retaliation should that happen.