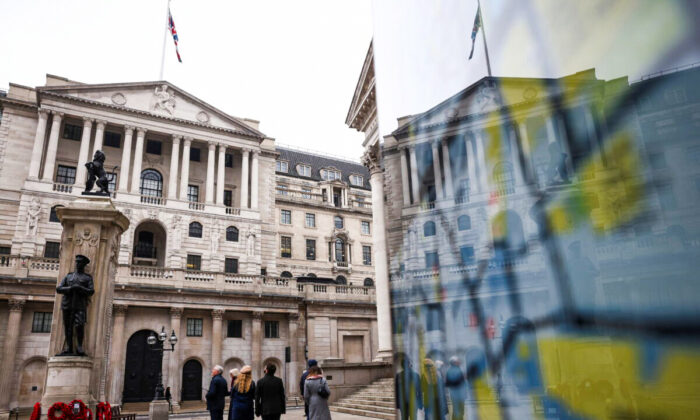 People stand outside the Bank of England in London on Jan. 23, 2022. (Henry Nicholls/Reuters)
Economy

LONDON—The Bank of England said on Monday that it planned to implement a final set of post-financial crisis capital requirements for banks from January 2025, bringing Britain in line with the European Union in a move that banks will welcome.

Tough bank capital reforms were agreed at the global level after banks were bailed out by taxpayers in the crisis.

Lenders already hold far more capital under the initial elements of the “Basel III accord,” whose final elements had been due to come into force in January this year, but were delayed by a year to January 2023 due to COVID-19.

The European Union, however, decided to propose delaying implementation by a further two years to January 2025 to give banks more time to adjust, forcing Britain and other jurisdictions to decide whether to follow suit.

The Bank of England said it will publish a consultation paper in the fourth quarter on implementing the final rules of Basel III.

“In addition, taking into account the publicly-announced implementation timetables in other major jurisdictions, and the need to provide firms with sufficient time to implement the final policies, our current intention is to consult on a proposal that these changes will become effective on 1 January 2025,” the BoE said in a statement on Monday.

By David Milliken and Huw Jones