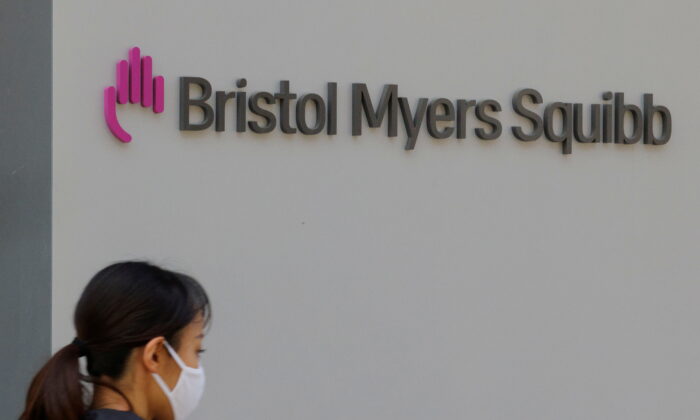 A sign stands outside a Bristol Myers Squibb facility in Cambridge, Mass., on May 20, 2021. (Brian Snyder/Reuters)
Markets

The New York-based drugmaker’s revenue for the quarter of $11.6 billion and adjusted profit of $2.00 per share both topped Wall Street estimates of $11.58 billion in sales and $1.92 per share, according to IBES data from Refinitiv.

Bristol Myers raised the low end of its full-year adjusted profit forecast by 5 cents and now expects to earn $7.40 to $7.55 per share.

Bristol Myers had missed analysts’ estimates in the first quarter, largely due to a decline in sales of its growth driver, the cancer immunotherapy Opdivo. Sales growth has since recovered.

“We’re seeing good recovery from COVID really across all of our markets,” Chris Boerner, Bristol Myers’ chief commercialization officer, said in an interview.

“In immuno-oncology, we’ve seen a gradual recovery in patient volume,” he added. “We’re still about 5 to 10 percent below where we were pre-COVID, but the trend is moving in the right direction.”

Cancer drugs Revlimid and Opdivo generated sales of more than $3.3 billion and $1.9 billion respectively. The blood thinner Eliquis, which Bristol shares with Pfizer Inc., brought in more than $2.4 billion. All three were higher than sales reported a year earlier.

The drugmaker is continuing to look at expanding its pipeline of medicines in development through deals, mostly involving smaller, early-stage companies in areas such as cancer, immunology, and cardiovascular health, Chief Financial Officer David Elkins said.