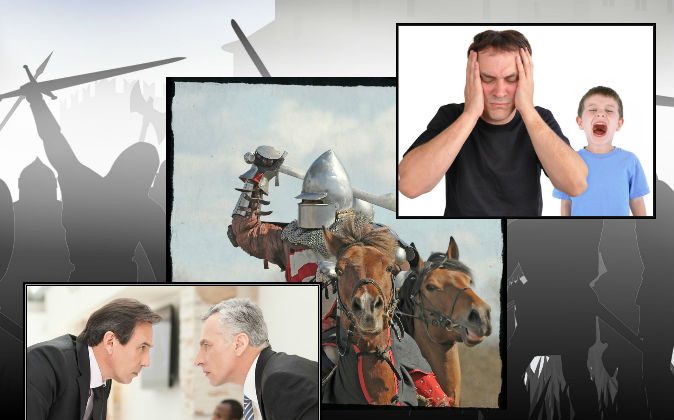 It’s not that we should necessarily treat the obstacles we encounter in daily life as enemies that must be annihilated—but sometimes ancient battle strategies have a wisdom about them that can inspire people facing the challenges of work or family life. The tactics can be seen in a philosophical light.

Kautilya was the advisor of Chandra Gupta, who ruled over a significant portion of northeastern India in the 4th century A.D. According to National Geographic, legend holds that “Kautilya devised a way to defeat the Nanda kingdom after seeing a young boy eat his chapati by nibbling around the edges. Thereafter, Chandra Gupta began to wear away at the Nanda [the rulers of the previous dynasty] by first vanquishing their dependent kingdoms.”

Whether it’s a given task that seems insurmountable, or a key person you want to make contact with (maybe a hard-to-access big-wig who could further your career or a pop star you really want to meet), or a seemingly impenetrable market you want your business to enter, you can gain inspiration from Kautilya’s strategy.

Look at the smaller-scale tasks you can more easily accomplish that will make the “insurmountable” one easier; work your way toward it, picking away at the little tasks around the edges.

Make contact with people who may know people who know the person you want to meet; work your way up to that inaccessible person through networking.

2. Xenophon and the Importance of Sticking Together

Xenophon (ca. 430–354 B.C.) led an army of 10,000 Greek mercenaries in retreat from deep within Persia. The purpose of their campaign in Persia—to seize the throne of Persia in the name of Cyrus the Younger—evaporated when Cyrus the Younger died. Xenophon’s retreat was a treacherous one across desert land and mountain passes pursued by the enemy.

Balance the strengths and weaknesses across a team or partnership to the advantage of all. It could be that you’re a teacher leading a group of kindergarten children on an outing, and to keep them together so you can see them all better, you put the slow-moving ones in front. It could be that you’re leading a work project and you have to keep the team members on pace; instead of organizing the tasks so that the fast-workers can’t do anything until the slow-workers complete their work, you can have the fast-workers doing the groundwork and the slow-workers can put on the finishing touches.

While many military tactics throughout history that have been hailed as brilliant have focused on deception, thus relying on the element of surprise, a renowned Chinese general took a different course. His tactics were flexible. For example, in fighting the strong Jurchen army, he chose the course of attack that would require the least amount of fighting for the greatest impact. His soldiers would engage in irregular small-scale nighttime skirmishes. The enemy became frightened and retreated. Yue also sowed discord among his enemies.

His moral strength led him to gain the unshakable support of his soldiers and the Chinese people, he was thus a strong leader. A saying in his army was: “I would rather freeze to death than pull down people’s houses; I would rather starve to death than rob the people.” Interfering with farmers’ crops would be punished with beheading in his army. Yue lived modestly himself and made sure his soldiers and their families were all well provided for. He personally comforted ailing soldiers and looked after the families of fallen generals.

Be flexible, choose the options for tackling a problem that will incur the least losses on either side. Taking care of others and maintaining loyalties will keep you strong because you will have the support of many behind you. Lead by example.

4. Persian Cuts Off His Own Nose

The Persian army of Darius the Great faced a tenacious Babylon around 500 B.C. The army surrounded Babylon for a year and a half, but could not penetrate it. Persian noble Zopyrus came to the Babylonian gates one day with his ears and nose cut off and whip marks cut into his body. He said Darius had mutilated him for his failure to capture Babylon and he wished to revenge himself on Darius by helping the Babylonians defeat the Persian army.

The crazy thing is, Zopyrus did it to himself just to gain the trust of the Babylonians. He won.

It’s probably best not to implement the lesson here in full force, but sometimes you may have to sacrifice something you cherish to get something you’ll cherish more. Maybe you have to accept a pay cut to take a job you’ll enjoy more, or maybe you’ll have to be daring and move to a foreign land to take a great opportunity there.

5. Sit Back and Relax

Zhuge Liang was responsible for defending the Chinese city of Hsi in the 3rd century A.D. from an invasion of soldiers from the Wei kingdom. He left the gates to the city wide open and told his people to continue about their daily lives as usual. Zhuge went so far as to play the lute and enjoy a cup of tea on the ramparts of the surrounding wall. The approaching army didn’t trust it. It was too easy. They skirted around the town, suspecting a trap within it. They ran right into Zhuge’s soldiers, however, behind the city, in the mountains.

If your always up-in-arms and ready for a fight, maybe you’ll get one. If you take it easy and let go of the stress, maybe the hostility will skirt right around you.

*Images of a father and his yelling son, a soldier on horseback, two business men facing off, and illustration of soldiers and a castle via Shutterstock