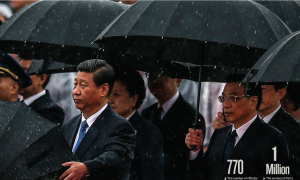 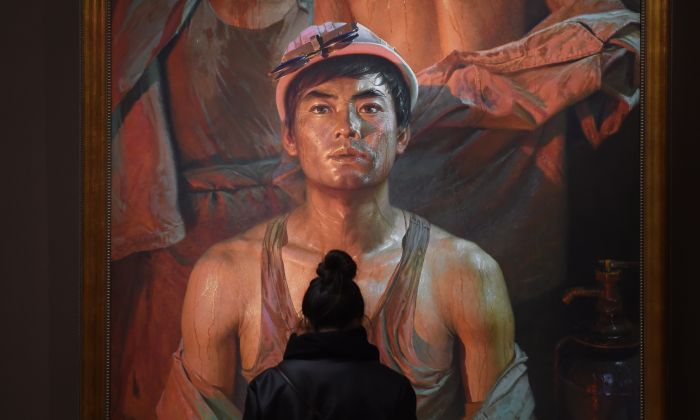 A visitor looks at a painting of a worker at an exhibition titled "Image of People" in Beijing on November 23, 2015. (GREG BAKER/AFP/Getty Images)
China Business & Economy

An artist’s position in China isn’t based just on the quality of his or her art—someone with the right political connections will see his work jump in value if he becomes an official within the Chinese communist regime.

China’s painting and calligraphy market went into turmoil recently after the China Artists Association (CAA) changed its board members for the new term that began on Dec. 23, 2018.

Though the CAA and China Calligraphers Association (CCA) are considered nongovernmental trade organizations on paper, they are, in fact, under the direct supervision of the Chinese People’s Political Consultative Conference, an advisory body to the Party leadership.

“The prices of artwork by the former CAA chairman and former vice-chairman has dropped 65 to 75 percent, while prices for artists on the newly created board has increased dramatically,” China Times reported Feb. 11. “Prices of the artists’ artwork are higher if his or her position is higher.” China Times is a partially state-run news agency.

The biggest increase happens when an artist becomes the CAA chairman. The report quoted Xiao Yunru, a consultant of the Shaanxi Province branch of the CCA, as saying: “For one term, which is five years, the value will skyrocket. The income from selling his artwork will be hundred times that of his salary.”

Meanwhile, Liu Yi, a Beijing art dealer told the China Times, “I have two former CAA vice chairmen’s paintings. I bought them for a friend [when the painter was vice chairman]. Now my friend asks me to sell the paintings, but I cannot find a buyer even with a 50 percent discount.”

Liu added that buyers only value the painter’s title and position, not the painting itself.

State-run media China Economic similarly reported on Feb. 18 that artwork value can be categorized into different levels based on the artist’s position within the CAA and CCA. The report also noted that within the art market, few people buy artwork from artists who aren’t CAA or CCA officials, resulting in artists striving to reach those coveted positions.

Some artists are willing to bribe higher-ups in order to become an official and generate more value for their work. To meet such demands for bribes, “one provincial CCA has 64 vice-chairmen,” the report said.

China Times previously reported in February 2013 that the positions aren’t free, stating, “Artists must pay a sponsorship fee to national galleries after being appointed to be vice chairman or higher positions.” These galleries, which belong to China’s Ministry of Culture and Tourism, are located throughout the country.

The Chinese regime’s anti-corruption authorities have taken notice of this phenomenon. In a June 2015 report, China Economic quoted the Central Commission for Discipline Inspection (CCDI), then the Chinese Communist Party’s chief anti-corruption watchdog, as saying: “Each CCA and CAA chairmen are billionaires, which has damaged [the Party’s] image of integrity and honesty that was created by the anti-corruption movement. It has deepened the gap between the rich and the poor, and enlarged social problems.”

That year, the CCDI published several articles about problems within the CCA and CAA bureaucracy, but didn’t arrest or punish any officials.

Zhang Xiaogang has been one of the most famous and wealthiest oil painters in China since the 1990s. The total revenue of his artwork reached 170 million yuan ($25.12 million) in 2006.

Zhu Qi, an art critic and independent curator, told China Times in 2013: “But Zhang Xiaogang’s annual income is much less than some Chinese painters. Many Chinese painter-officials earn tens of millions, even thousands of millions of yuan per year. They are provincial or higher levels CAA chairmen and gallery presidents.”

Liu Dawei, the CAA chairman from December 2008 to December 2018, was on the list of Hurun magazine’s (akin to Forbes) Most Successful Chinese Artists Alive Today since 2009.