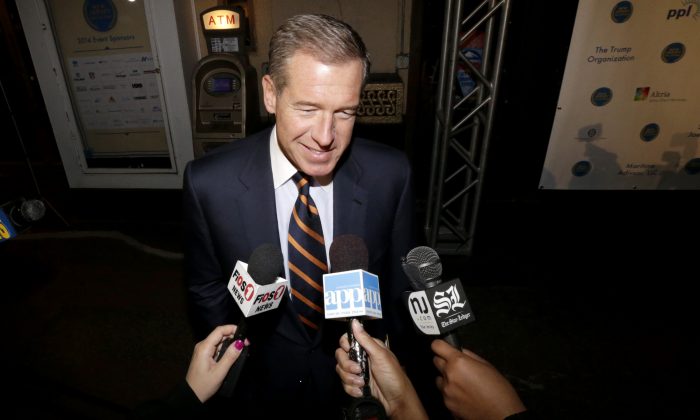 Brian Williams, the NBC Nightly News host, has been suspended for six months without pay, according to reports.

Williams was suspended following an internal NBC investigation. Williams last week said that he made up bits of a story in 2003, claiming he was in a military helicopter that was shot by an RPG in Iraq.

“The suspension will be without pay and is effective immediately,” NBC News President Deborah Turness wrote to staff members. “We let Brian know of our decision earlier today. Lester Holt will continue to substitute Anchor the NBC Nightly News.”

The CEO of NBCUniversal, Steve Burke, said he met with Williams on Tuesday, CNN reported.

Burke wrote in a statement on Tuesday evening, “By his actions, Brian has jeopardized the trust millions of Americans place in NBC News. His actions are inexcusable and this suspension is severe and appropriate.”

Burke continued, “Brian’s life’s work is delivering the news. I know Brian loves his country, NBC News and his colleagues. He deserves a second chance and we are rooting for him. Brian has shared his deep remorse with me and he is committed to winning back everyone’s trust.”

Over the weekend, Williams said he would step down voluntarily for a few days. But NBC decided to take it a step further, and it announced Tuesday night that Williams won’t be back for half a year.

Lester Holt will continue to fill in for him.

In December, Williams agreed to a five-year contract that was reportedly worth approximately $10 million a year.

Some critics suggest that Williams should be fired. Others wonder if commerce will win out, since Williams has kept “Nightly News” at the top of the ratings while much of his news division crumbled around him.

“This is one of the toughest calls that I’ve ever seen,” said Paul Levinson, professor of communications and media studies at Fordham University. “On the one hand, the public is right to expect nothing but the truth from our reporters and our news anchors.”

Williams announced Saturday he was stepping away from the show for a few days. NBC News launched an internal probe coordinated by the division’s investigative editor Richard Esposito.

Williams’ sub, Lester Holt, told viewers midway through Monday’s broadcast that Williams had taken himself off the air because questions have been raised about how he recalled several stories. Holt did not specify what the stories or questions were.

“He’ll be off while this issue is dealt with,” Holt said.