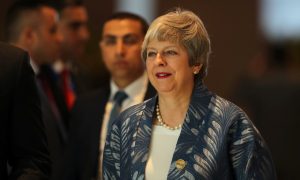 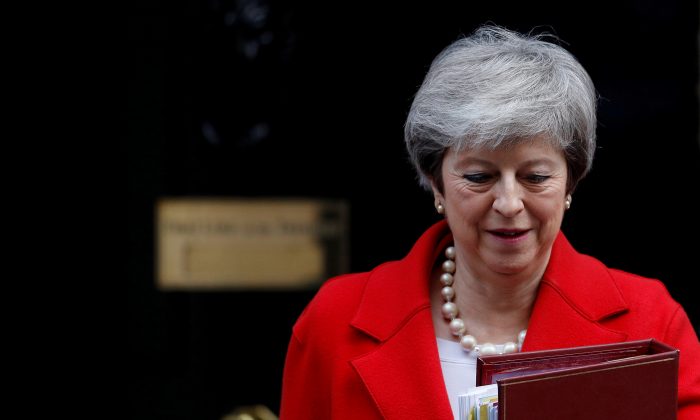 LONDON—A group of Brexit-supporting lawmakers who rejected British Prime Minister Theresa May’s European Union exit deal in January have set out the changes they want to see to her agreement in return for their support.

With Britain due to leave the bloc on March 29, May is seeking assurances on the so-called backstop arrangement aimed at preventing a return to hard border controls between EU member Ireland and British-ruled Northern Ireland.

Concerns over the backstop led to parliament overwhelmingly rejecting May’s deal in January, with critics saying it could leave the country tied to EU rules indefinitely.

The Sunday Times said a group including former Brexit minister Dominic Raab and Nigel Dodds, the deputy leader of the Northern Irish party which props up May’s minority government, had drawn up the tests by which they would assess any changes.

“The mechanism has got to be legally binding, so effectively treaty-level change,” one of the group, Conservative lawmaker Michael Tomlinson, said in an interview with the newspaper.

“The second part is the language. It can’t be a reinterpretation of the withdrawal agreement or a re-emphasis; it’s got to be really clear language as to where we are going … The third requirement is a clear exit route.”

It comes after Jacob Rees-Mogg, the leader of a pro-Brexit faction in May’s Conservatives which set up the group, this week scaled back his opposition to her deal saying he would no longer insist that the backstop be removed.

If May secures the demands, she would win the backing of Northern Ireland’s DUP and many Brexit-supporting lawmakers in a vote on the deal promised by March 12, the Times said.

“They have made it very clear that if the effect of any change is to get the guarantees on the Irish backstop that they sought, then that would be sufficient rather than demanding that it has to be done by one mechanism or another,” trade minister Liam Fox told BBC TV on Mar. 3.

“I hope it is a genuine attempt, and I think it is, to try to map out ground where we can have common territory.”

The EU’s chief negotiator Michel Barnier said on Mar. 1 that the bloc was ready to give Britain more guarantees that the backstop was only intended to be temporary and used for a “worst-case scenario”.

In a further sign that former opponents of May’s deal might now back a revised version, Graham Brady, a senior Conservative lawmaker, said he would support it with legally binding assurances on the backstop.

“Once we have that, my colleagues in parliament need to recognize the strength of feeling,” he wrote in the Mail on Sunday newspaper.

“The whole country is tired of vacillation and delay. When the right compromise is offered, we should pull together behind the Prime Minister and help her to deliver our exit from the European Union on March 29.”

Opposition Labour lawmaker Caroline Flint said she believed as many as 30 lawmakers from her party would support May’s revised deal if they are allowed to vote the way they want rather than being ordered to vote against it by their party.

“I urge my Labour colleagues to consider voting for an improved deal,” she told Sky News.