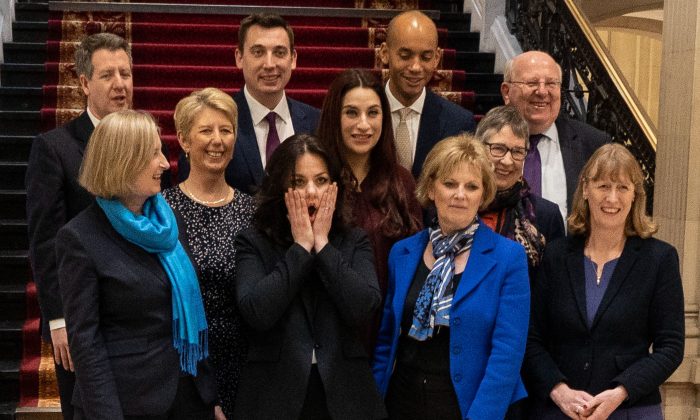 LONDON—Brexit has torn the fabric of Britain’s political system, say a group of 11 lawmakers behind a dramatic series of defections that have sent shockwaves through one of the world’s oldest and most stable parliaments.

But the group needs to incite a much wider rebellion to achieve its goal of triggering a rethink over the country’s exit from the European Union and smashing a two-party structure that they say is no longer fit for use.

“Where will it lead? It could lead to nowhere, it could become a footnote in the history of Brexit, or it could become the beginnings of the break-up of the party system which has been going for the last 100 years,” said Tony Wright, emeritus professor of government and public policy at UCL university.

“They need numbers. You’re going to need some cabinet resignations, that would really set things moving.”

Just 36 days from Brexit, Prime Minister Theresa May has yet to find a divorce deal with the EU that Parliament will approve, leaving the world’s fifth-largest economy and all its global investors staring down the barrel of a potentially chaotic exit.

Over three days of high political theater in London this week, three members of May’s right-leaning Conservative Party and eight from the leftist Labour opposition have quit their parties to become independent lawmakers.

It is already the most significant breakaway group in almost four decades for a Parliament in which the two main parties have formed the government of the day for almost a century, largely restricting smaller groups to the political fringes.

The defectors, now known as “The Independent Group,” say their old parties have been hijacked by far-left and far-right factions, leaving the center ground of British politics unmanned and powerless to exert its influence.

“You don’t join a political party to fight it, and you don’t stay in it and skirmish in the margins when the truth is the battle is over and the other side has won,” said Anna Soubry, the one-time Conservative minister who resigned on Feb. 20.

No Change To Brexit Arithmetic

Brexit has proved to be the tipping point.

The 2016 referendum that split the country 52–48 percent in favor of leaving also divided both main political parties, drawing a new battle line in Parliament between “Leavers” and “Remainers” that cuts right through traditional party loyalties.

While the country is divided over EU membership, most agree it is at a crossroads and that its choices over Brexit will shape the prosperity of future generations.

May has failed to rally euroskeptic and pro-EU wings of her party around a common position on how best to leave the bloc. Labour leader Jeremy Corbyn has been accused by critics of equivocation and a lack of clear direction.

“If Brexit was a pained clarion call for change, then we hear it,” said Heidi Allen, one of the former Conservative lawmakers.

“Our parties have been unable to grasp the magnitude of the challenge and have no plan to respond, nor heal the division across our cities, our villages, and our dining tables.”

The now-independent lawmakers were already voting against the government, so their resignation has not changed the arithmetic in the Parliament that won’t approve May’s Brexit deal, but can’t agree on what alternative path it wants to pursue.

The group knows it can only capitalize on widespread frustration over this stalemate and fears about the ticking Brexit clock if they succeed in convincing others there is a viable alternative to the two positions offered by Labour and the Conservatives.

“We have taken the first step in leaving the old tribal politics behind and we invite others who share our political values to do so too,” said former Labour lawmaker Chuka Umunna, who resigned on Feb. 18.

The lawmakers have not yet formed a new party with an agreed set of policies and positions on key issues. But their future will almost certainly be defined by Brexit, and they do not have much time to make an impact.

Almost all the group’s members are clear that they do not want Britain to leave the EU without a deal, and they do want to hold a second referendum.

One or both of those views are shared by many in Parliament, including ministers who have so far remained loyal to May and voted in favor of her deal despite their reservations.

Their loyalty is set to be tested on Feb 27 when May either returns to Parliament with a revised Brexit deal, or to set out what progress she has made towards one. Lawmakers will have a chance to vote on what happens next.

Those votes could see May’s deal rejected and Parliament handed an opportunity to seize control of the process and use it to rule out a no-deal exit and delay Britain’s departure.