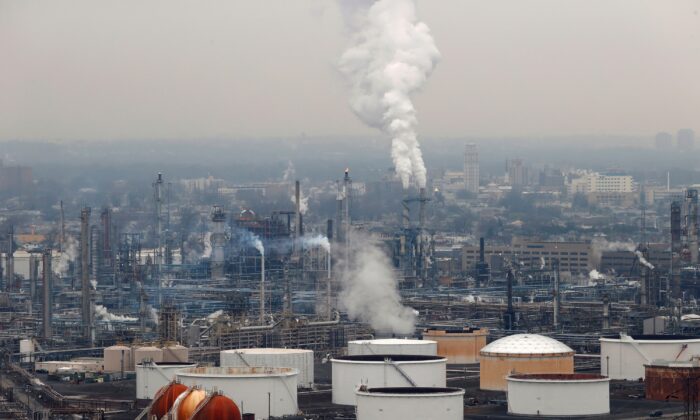 The oil tanks and the Bayway Refinery of Phillips 66 in Linden, N.J., on March 30, 2020. (Mike Segar/Reuters)
Gold and Commodities

The International Energy Agency said this week oil demand growth would grind to a halt in the fourth quarter. The dollar held near recent peaks, supported by expectations the U.S. Federal Reserve will continue to tighten policy.

“There are many forces dictating the price action in oil markets right now, with economic uncertainty right up there,” said Craig Erlam of brokerage OANDA. “The stronger dollar is potentially another headwind.”

Oil also dropped after a late-night deal to avert a U.S. railroad strike, that could have hit food and fuel supplies. The prospect of a strike lent the market some support on Wednesday.

Crude has dropped substantially after a surge close to its all-time highs in March after Russia’s invasion of Ukraine added to supply concerns, pressured by the prospects of recession and weaker demand.

New clashes between Armenia and Azerbaijan, an oil producer, linked to a decades-old dispute between the ex-Soviet states raised another risk to supplies, although a senior Armenian official said on Wednesday a truce had been agreed.

“Whilst challenging the $100 hurdle is currently not a dead cert it seems that a bottom at around $90 has been found basis, Brent, largely thanks to war-related supply fears,” said Tamas Varga of oil broker PVM.

Oil came under pressure from a strong dollar, which makes dollar-denominated commodities more expensive for other currency holders, ahead of a Federal Reserve meeting next week that could hike interest rates by a jumbo 100 basis points.

U.S. crude inventories rose by a more than expected 2.4 million barrels, although they were again boosted by the ongoing releases from the Strategic Petroleum Reserve, part of a program scheduled to end next month.