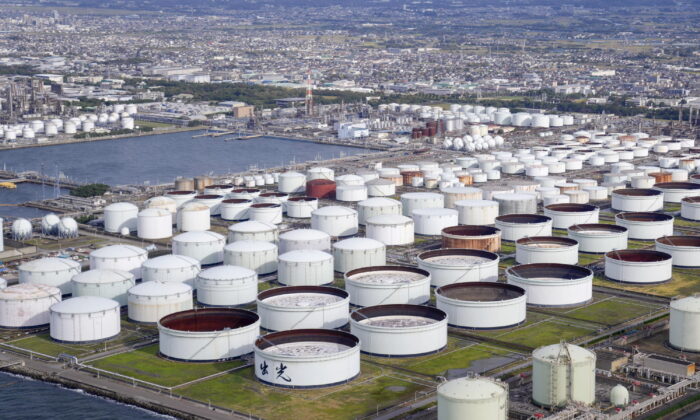 Brent Anchored Above $100 a Barrel, Heading for Weekly Gain

LONDON—Oil prices rose as much as $1 on Friday on signs of improving fuel demand, though an upcoming speech from the U.S. Federal Reserve chairman capped further gains.

Both contracts slumped by about $2 on Thursday but are on track for a weekly gain of around 4 percent for Brent and 3 percent for WTI.

The U.S. economy contracted at a more moderate pace than initially thought in the second quarter as consumer spending blunted some of the drag from a sharp slowdown in inventory accumulation.

“We expect the post-pandemic normalisation of mobility in emerging markets in Asia and gas-to-oil switching effects to partly offset the weaker economic growth. In addition, mobility data appears to be holding up well,” it said.

Additional price support came from OPEC’s de facto leader Saudi Arabia on Monday flagging the possibility of production cuts to balance the oil market and offset the return of Iranian barrels to oil markets should Tehran clinch a nuclear deal with the West.

“The impression remains that Saudi Arabia is not willing to tolerate any price slide below $90. Speculators could view this as an invitation to bet on further price rises without the need to fear any more pronounced price declines,” Commerzbank said in a note.

The market awaits fresh signals on the outlook for interest rate increases in a speech from Federal Reserve Chair Jerome Powell later on Friday.

“Fed policymakers have been making hawkish overtures of late, and this stance will likely be reiterated by Powell’s message,” said PVM analyst Stephen Brennock.