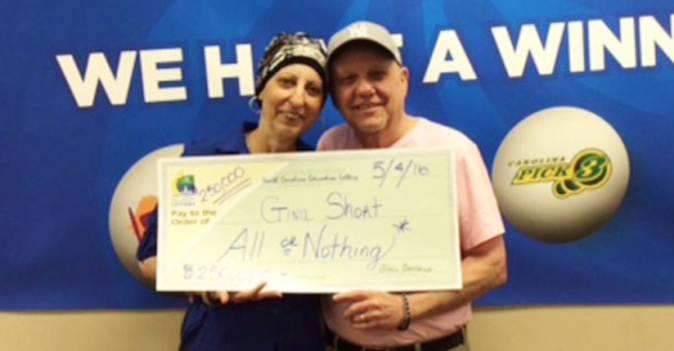 Gina Short had better odds of being struck by lightning twice, but instead, she hit the lottery twice, according to North Carolina’s Education Lottery website.

Short and her husband, Len, won $1 million in an ‘Ultimate Millions’ lottery game in January, then on April 29 the duo won $250,000 in an “All or Nothing” lottery drawing.

“It’s not something you can put into words,” Len Short said. “For us to have the good fortune of winning not just one big prize but two, we are just very thankful for that.”

Short was diagnosed with breast cancer 6 years ago, and is currently undergoing chemotherapy.

She had a gut feeling she would get lucky, so they picked up a ticket from a Publix grocery store in Cornelius, N.C.

“I have a second chance,” she said after winning the million-dollar pot this year. “That’s what my whole life is about, second chances.”

Speaking of jackpots; the current Powerball jackpot is estimated to be over $415 million.

The chances of winning it are 1 to 292 million.

Here are 5 things that are more likely to happen than winning the Powerball, according to USA Today: