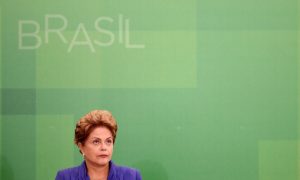 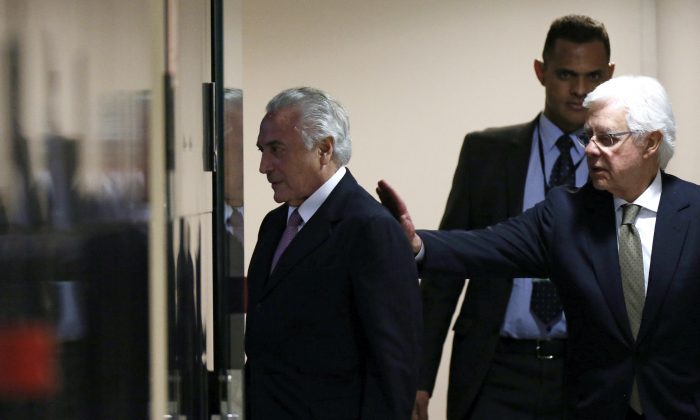 SAO PAULO/BRASILIA—Brazil’s former President Michel Temer was arrested on March 21 in “Operation Radioactivity,” a probe of alleged graft in the construction of a nuclear power plant, threatening to delay debate over the government’s ambitious fiscal reforms.

Temer was president from 2016 to 2018, taking office after the impeachment of Dilma Rousseff, who he served under as vice president for six years. His lawyer confirmed he was arrested in Sao Paulo, and his legal team has lodged an appeal for Temer to be freed.

Prosecutors alleged that Temer was the leader of a “criminal organization” that took in 1.8 billion reais ($472 million) in bribes or pending future kickbacks as part of numerous schemes, including one related to the Angra nuclear power plant complex on the Rio de Janeiro coast and other state firms. The former president’s Brazil Democratic Movement party long held sway over key appointments in Brazil’s largely state-run energy sector, including nuclear power plants.

Federal police also arrested Temer’s former minister and confidant Wellington Moreira Franco, who is married to the mother-in-law of Rodrigo Maia, the speaker of the lower house of Congress and a leading proponent of pension reform.

Temer and Moreira Franco have repeatedly denied previous accusations of wrongdoing. Maia was not immediately available for comment.

Asked about the arrest during a trip to Chile, President Jair Bolsonaro said “everyone must respond for their actions” and that Temer’s fate was the result of traditional corrupt political practices that he has vowed to end.

Over 150 powerful politicians and businessmen have been convicted in relation to the investigation since 2014, which has reshaped the country’s political and business landscapes.

Temer is the second former president to be arrested in the anti-corruption push. Former President Luiz Inacio Lula da Silva is in jail serving over 12 years for a corruption conviction.

Voters’ anger over long-running graft fueled the ascent of Bolsonaro, a conservative politician who served 30 years as a fringe lawmaker but rose to power on the back of pledges to end graft in Brasilia.

Read More
Bolsonaro’s Agenda Is What the Doctor Ordered for Brazil
Exclusive: Purging Brazil of Socialism, an Ongoing Battle—Eduardo Bolsonaro

Work on Angra 3, the third nuclear power plant planned in Brazil’s Angra complex, has advanced haltingly since 1984 and has long been on the radar of graft investigators. The complex is run by Eletronuclear, a unit of state power holding company Centrais Eletricas Brasileiras SA, or Eletrobras.

Shares of Eletrobras, which has been the focus of shifting privatization plans in recent years, fell nearly 3 percent on Thursday.

In 2016, Othon Luiz Pinheiro da Silva, the former chief executive of state nuclear power company Eletronuclear, was sentenced to 43 years in prison on a corruption conviction.

Silva colluded with executives at Brazilian engineering firms Andrade Gutierrez and Engevix to receive kickbacks in return for overbilling on the Angra 3 construction, court records show.

Temer, who left office with an approval rating of 7 percent, had not been formally cited in the case.

But federal investigators alleged on Thursday he took at least 1 million reais in bribes in 2014 in relation to a contract at the nuclear complex won by Engevix and the Brazilian subsidiary of the Finnish firm AF Consult LTD.

Prosecutors told a news conference that Temer, who was a federal lawmaker for more than 15 years before becoming vice president, had been a part of schemes diverting public funds since the 1980s.

“The criminal group that was arrested today … has been in operation for more than 40 years,” federal prosecutor Fabiana Schneider said.

The group included a “counterintelligence” arm that tried to thwart any criminal charges by monitoring investigations and the prosecutors themselves, feeding false documents to authorities to mislead them, the prosecutors said.

Temer was hit with separate corruption charges during his presidency that was blocked by allies in the lower house of Congress, which must authorize charges against a sitting president.

Temer, 78, previously led the MDB, a regionally fragmented party with no consistent ideology that for two decades held the most seats in Congress, making it a major power broker.

The son of Lebanese immigrants who arrived in Brazil in 1925, Temer was the youngest of eight children and began his political career in the 1960s as an aide in Sao Paulo state’s education secretariat.

The governor at the time, Ademar de Barros, one of the first politicians to inspire the popular Brazilian saying about their leaders: “He steals, but he gets things done.”

By Brad Brooks and Anthony Boadle