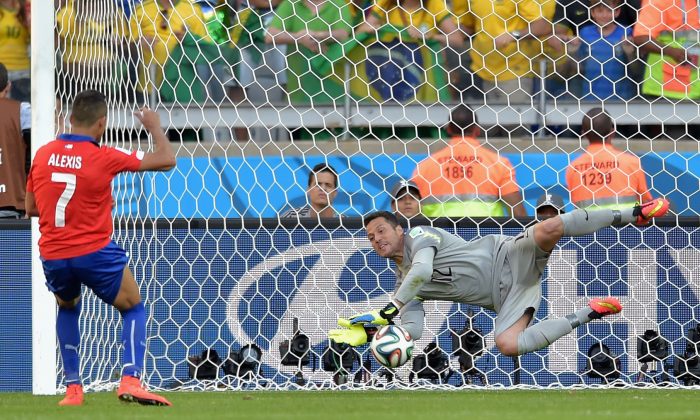 Julio Cesar of Brazil saves the penalty shot of Alexis Sanchez of Chile in a shootout during the 2014 FIFA World Cup Brazil round of 16 match between Brazil and Chile at Estadio Mineirao on June 28, 2014 in Belo Horizonte, Brazil. (Buda Mendes/Getty Images)
Soccer

FORTALEZA, Brazil—Luiz Felipe Scolari thinks Brazil may be at an advantage by playing in the World Cup quarterfinals against a Colombia team that likes to attack often.

Scolari said he knows it will be a very tough match on Friday, but expects Brazil to face fewer difficulties than it did in the second-round game against a feisty and more defensive-minded Chilean team.

The Brazilian coach said he doesn’t expect “a war” against Colombia, unlike something he’d expect more against other South American rivals.

“The matches against Colombia are very tough, they have a very good team,” Scolari said Thursday. “But it’s different. It’s a different type of rivalry. When we don’t have this war atmosphere, our players feel more at ease. Teams like Argentina, Uruguay and Chile don’t let that happen.”

Brazil struggled against Chile and was never able to impose its game. After a 1-1 draw, the tournament hosts needed a great performance by goalkeeper Julio Cesar in the penalty shootout to keep alive their hopes of a sixth world title.

The Colombian team has been thriving at the World Cup with an upbeat style that is both thrilling and effective. While Brazil won two of its three group games and needed a shootout to advance from the second round, the Colombians had no difficulty beating their first four opponents.

“I like to watch Colombia play. It’s a very organized team, has tactical discipline and a lot of quality,” Scolari said. “But they play just like our team plays. There’s nothing different. And we know that we have some qualities that may cause some damage to them.”

Brazil captain Thiago Silva said that shouldn’t be seen as a concern.

“It’s good to play against a team that comes out attacking like Colombia does,” Silva said. “They have quality so they attack a lot. That helps our team, it’s an open match. It’s better to play against teams that play like that.”

Colombia has beaten Brazil only twice — the last time in the 1991 Copa America — but the teams have drawn the last four head-to-head meetings, most recently in a 2012 friendly.

For Friday’s match at the Arena Castelao in Fortaleza, Brazil will be without suspended defensive midfielder Luiz Gustavo. Scolari is expected to replace him with midfielder Paulinho, but the coach has also considered changing the squad formation to the 3-5-2 scheme that he used when Brazil won the 2002 title, with an extra central defender.

In Thursday’s news conference, Silva played down media criticism of his leadership after he isolated himself from the other players before the penalty shootout against Chile.

“I don’t care about what is said by people who don’t even know me,” Silva said. “I know I have the support from my coach. I have the respect from my teammates. I only have to focus on my job.”

Scolari defended the player, saying “everyone has its own way” of dealing with the pressure.

Brazil has reached the quarterfinals in six consecutive World Cups, but was eliminated at this stage in the last two.