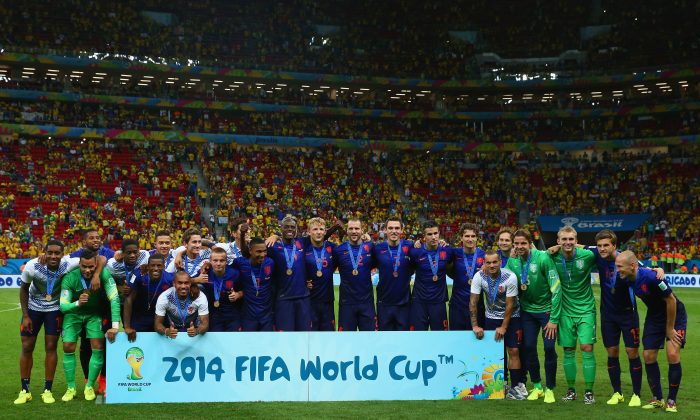 The Netherlands celebrate with their medals after defeating Brazil 3-0 in the 2014 FIFA World Cup Brazil Third Place Playoff match between Brazil and the Netherlands at Estadio Nacional on July 12, 2014 in Brasilia, Brazil. (Photo by Robert Cianflone/Getty Images)
Soccer

Robin van Persie opened the scoring for the Netherlands via a 2nd minute penalty.

Daley Blind made it two goals to Netherlands in the 16th minute.

Georginio Wijnaldum added the third Netherlands goal in the 90th minute against Brazil, courtesy of a Daryl Janmaat cross from the right wing.

BRASILIA, Brazil (AP) — Robin van Persie and Daley Blind scored early goals to help give the Netherlands a 3-0 win over host Brazil in the third-place match at the World Cup on Saturday.

With the result, the Netherlands finishes a World Cup unbeaten in regular play for the first time, having lost to Argentina on penalties in the semifinals. After finishing runner-up in 2010, the third place is the best position for the Dutch squad since it lost the final in 1974 and 1978.

The loss added to Brazil’s frustration at the home tournament following the disastrous 7-1 defeat to Germany. After the final whistle, the team was loudly booed by the nearly 70,000 fans that attended the match at the National Stadium in Brasilia. Many had already left even before the late third goal by the Dutch.

Van Persie converted a penalty kick three minutes into the match after Arjen Robben was brought down by Brazil captain Thiago Silva on the edge of the area. Blind added to the lead in the 17th with a shot from near the penalty spot after defender David Luiz made a mistake while trying to clear a cross in front of the goal. Georginio Wijnaldum rounded off the win in injury time with a shot inside the near post.

“The most beautiful was our resilience. We were knocked out but we came back and finished third,” Wijnaldum said. “We wanted to close it out well.”

Brazil looked lost from the start, making many of the same defensive mistakes that marked the historic defeat to the Germans four days ago. The Netherlands took advantage with quick passes and speed in the attack.

Silva had to foul Robben after being beaten on the run, leading to van Persie’s firm left-foot shot into the right upper corner to put the Dutch ahead.

The Dutch wanted a red card for Silva for a professional foul, but Algerian referee Djamel Haimoudi only gave him a yellow. Silva had missed the semifinal against Germany because of a yellow card suspension.

Blind added to the lead after Luiz failed to clear a cross, heading the ball right back to the Dutch defender for an easy goal.

Wijnaldum closed the scoring in injury time with a goal from inside the area after a cross by Daryl Janmaat.

Brazil’s best chance in the first half came on a free kick taken by Oscar in the 36th, but Silva and Luiz were not able to reach the low cross in front of goal. In the second, Ramires came close with a low right-foot shot from the top of the area in the 60th.

Brazil wanted a penalty when Oscar went down in the area in the 68th, but the referee instead gave a yellow card to the Brazilian for diving.

It was the fourth time Brazil played in a third-place match. It beat Sweden in 1938 and Italy in 1978, and the only other loss had come against Poland in 1974.

The Netherlands had played in the third-place match one other time. It fell to Croatia 2-1 in 1998 after being beaten by Brazil in the semifinals.