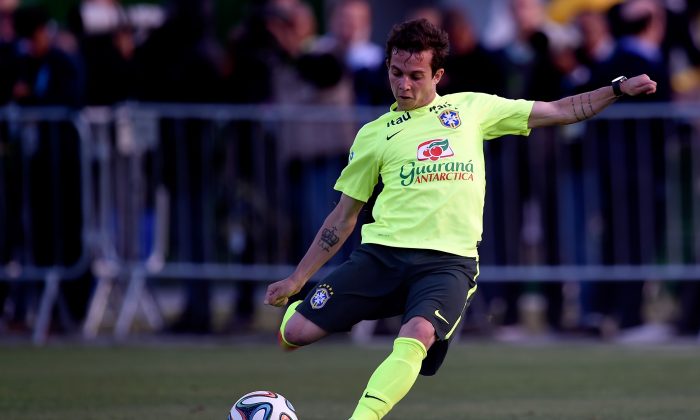 Brazil's striker Bernard in action during a training session at Granja Comary on July 6, 2014 in Teresopolis, Brazil. (Photo by Buda Mendes/Getty Images)
Soccer

The starting lineups for Brazil and Germany have been announced.

Bernard plays for Ukrainian club side Shakhtar Donetsk as a left-sided winger.

Before the match, Brazil coach Felipe Scolari suggested that he would fielding three defensive midfielders, but with Bernard’s inclusion, it seems that Scolari has gone for a like-for-like replacement.

Meanwhile, Germany coach Joachim Loew has named an unchanged side from the one that defeated France.

Miroslav Klose starts, and will look to break the World Cup all-time scoring record of 15 goals held by himself and the Brazilian Ronaldo.

Fans were already heading out to popular fan fests like those at Copacabana and in Sao Paulo, with most focused on the events that will unfold in Belo Horizonte in the evening.

At the Mineirao Stadium, people wore Neymar masks to honor the 22-year-old star. Streets were filling with fans walking with Brazilian shirts and flags. Groups of Germany fans also could be seen around Belo Horizonte.

“We heard so many bad things about Brazil before we came, but it’s been an incredible experience so far,” said 29-year-old Michael Beussemer, who has been in the country for more than two weeks following Germany at the World Cup. “The fan atmosphere has been great, we can’t complain about anything. Everyone is hyped up for this match, it’s just great to be able to be here.”

Brazilians from all over the country were turning up early, soaking up the atmosphere and the beverages.