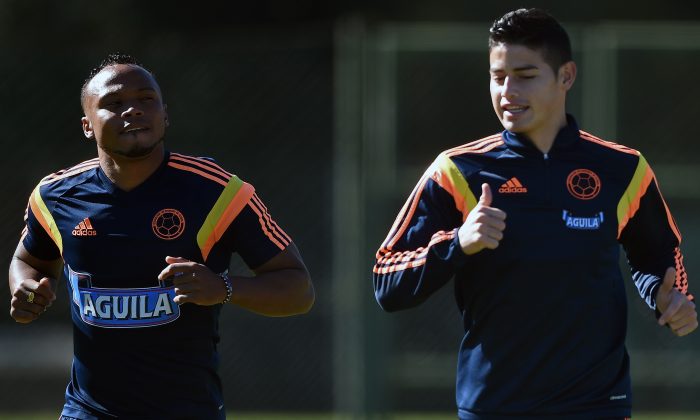 Brazil and Colombia are set to face each other in a World Cup 2014 quarter final match on Friday, July 4.

Brazil is surrounded by doubts after a more difficult start than expected to the tournament it is hosting.Colombia is upbeat after convincing performances and four straight wins.

While the hosts narrowly beat Chile in a penalty shootout to avoid elimination in the second round, the Colombians had a convincing 2-0 win over Uruguay to reach the quarterfinals for the first time.

The South American rivals play Friday in the northeastern city of Fortaleza, with Brazil hoping to keep alive its quest for a sixth World Cup title and Colombia aiming to extend its best ever run in football’s showcase event.

Despite its tradition and home-field advantage, Brazil is far from a big favorite. An uncomfortable opening win over Croatia, a draw with Mexico and a win over Cameroon in the group stage preceded the tight knockout match against Chile, when Brazil advanced on penalties.

“It’s normal to have people demanding that we play better,” Brazil coach Luiz Felipe Scolari said. “But it’s also normal what we have been seeing in this World Cup so far. There were a lot of even matches. There is no difference between teams that have tradition and world titles and the rest of the teams. Matches are being decided on penalties, in the final minutes, on mistakes.”

Colombia has won all of its matches without any real difficulty, thanks in part to the tournament’s second-best attack with 11 goals, one less than the Netherlands. It also has a strong defense with only two goals conceded.Brazil, meanwhile, has scored eight goals and conceded three.

“We’re very happy because we are making history,” said Colombia midfielder James Rodriguez, the tournament’s leading scorer with five goals. “We want to do even more because this is a team that really wants to win.”

Colombia has beaten Brazil only twice — the last time in the 1991 Copa America — but the teams have drawn the last four matches they played, including in a 2012 friendly in New York.

Brazil has reached the quarterfinals in six consecutive World Cups, but was eliminated at this stage in the last two.

The host nation’s hopes of going farther into the tournament this time remain on the shoulders of Neymar, who has scored four goals and has been decisive for his team. The striker injured his right knee against Chile but team doctors said he will be fit to play at the Arena Castelao.

“Chile and Colombia have similar teams,” Neymar said. “It’s going to be another war. We will need to be on top of our game from the beginning to try to play better. Hopefully we won’t have to suffer so much.”

Colombia is relying mostly on Rodriguez, one of the stars of the World Cup so far.

“He has a lot of quality with his left foot, he’s showing why Monaco paid a lot of money to sign him,” Brazildefensive midfielder Fernandinho said. “We can’t give him any space, we are going to have to be very careful with him.”

Colombia coach Jose Pekerman has all of his players available for Friday’s match, but Scolari will be forced to make changes due to the suspension of defensive midfielder Luiz Gustavo. The Brazilian coach said he may go back to the formation that he used when his team won the 2002 title, with three central defenders.

In Wednesday’s training, Scolari hinted that midfielder Paulinho will be Gustavo’s replacement, but he tested several other lineups, including one without central forward Fred, who has been struggling since the competition started.

One of Scolari’s biggest concerns remains the nerves his young squad is experiencing. He admitted that a lack of experience is hurting his team, so he scheduled a players’ meeting with the team psychologist on Tuesday to try to help them cope with the pressure.

Some of the players lost their composure in the tense match against Chile.

“What happened against Chile will serve to motivate us in the next matches,” Brazil midfielder Ramires said. “We will be better prepared.”