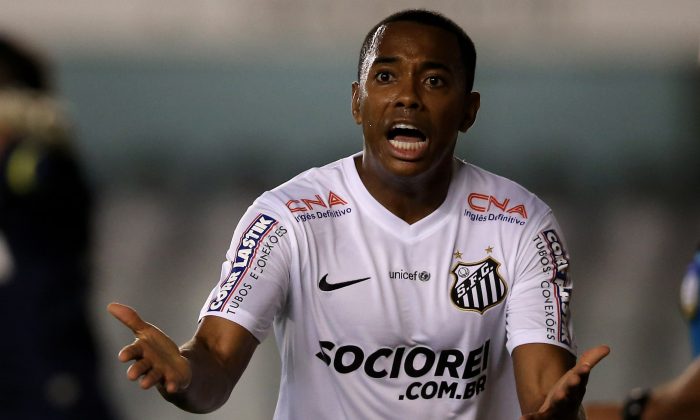 Robinho of Santos reacts during the match between Santos and Atletico PR for the Brazilian Series A 2014 at Vila Belmiro stadium on August 20, 2014 in Sao Paulo, Brazil. (Photo by Friedemann Vogel/Getty Images)
Americas

Brazil and Colombia are set to play in an international friendly match on Friday, September 5.

The game will be broadcast on beIN Sports USA and beIN Sports en Español in the United States.

SAO PAULO—Striker Robinho is back with Brazil’s national team for the first time since being left out of the World Cup.

Coach Dunga called him up on Sunday for Brazil’s friendlies against Colombia and Ecuador next month to replace injured Zenit striker Hulk, who hurt a leg muscle in a Russian league match.

The 30-year-old Robinho hadn’t made the national team since being summoned by coach Luiz Felipe Scolari for friendlies in late 2013.

Despite playing well in the matches against Honduras and Chile at the time, he was left out of the squad that finished fourth at the home World Cup in July.

Robinho was a starter in the 2010 World Cup under the command of Dunga in the coach’s first stint at the helm of the national team, but was left out of his initial list for the upcoming friendlies.

Robinho has been playing well and scoring goals since returning to Brazilian club Santos this month on a one-year loan from Italy’s AC Milan. He recently missed a few games because of a muscle injury but recovered fully.

Robinho has been saying his main career goal is to keep playing for the Selecao.

Dunga replaced Scolari after this year’s tournament, when Brazil fell 7-1 to Germany in the semifinals and lost 3-0 to the Netherlands in the third place match.

Brazil will play Colombia on Friday in Miami and Ecuador on Sept. 9 in New Jersey.

Marcelo will be one of the 10 players called up by Dunga who were in the 2014 World Cup squad coached by Scolari.