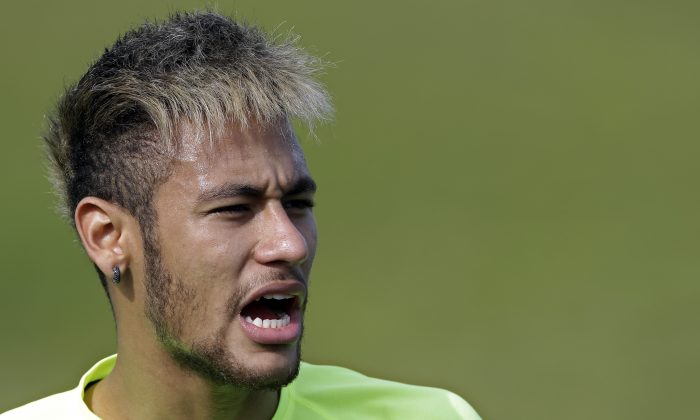 The game will be broadcast on ESPN Brasil, Band, FOX Sports 1 Brasil, BandSports, Globo, and SporTV in Brazil, as well as DIRECTV Chile, TVN, and Canal 13 in Chile.

Live stream is available on Watch ABC and Watch ESPN.

TERESOPOLIS, Brazil (AP) — The knockout stage of the World Cup begins Saturday with host Brazil playing Chile, the South American rival it has dominated over the years.

Brazil hasn’t lost to Chile in more than a decade, and has never lost to it on home soil. But for the first time Chile arrives to face its neighbor with plenty of confidence, thanks in part to a convincing campaign in Group B that included a victory over defending champion Spain.

The Chileans say there is no reason they can’t also surprise the hosts, and Brazilians admit they are wary of the threat.

Brazil coach Luiz Felipe Scolari warned about Chile more than six months ago, following the World Cup draw. Despite the possibility of the hosts facing Spain or the Netherlands, the team’s nemesis in the quarterfinals of the 2010 tournament, Scolari said at the time that his biggest concern was the Chilean squad, which he hoped “wouldn’t qualify” for the second round.

“When I talked about Chile then, people made fun of me, they said Chile wasn’t good enough,” Scolari said. “But I already knew the work of coach (Jorge) Sampaoli and their players. We already knew how they played.”

“We can’t take that into consideration,” Chile goalkeeper Claudio Bravo said. “A lot of people say that we don’t have anything to lose, but on the contrary, we have a historic opportunity to eliminate the hosts. It’s our longtime rival, one with a lot of titles. It’s up to us to do it.”

Brazil and Chile played twice in friendlies last year. Scolari’s team won 2-1 in November in Canada, and the teams drew 2-2 in April at the same Mineirao Stadium where Saturday’s match will be played.

The Chilean squad has four players who know Brazilian football well — Eduardo Vargas played for Brazilian club Gremio until last year, while Jorge Valdivia is with Palmeiras, Charles Aranguiz with Internacional and Eugenio Mena with Santos.

“They have players with a lot of quality. It’s always difficult to play a team like that,” Brazil midfielder Luiz Gustavo said. “We don’t think about what happened in the past. We have to think about what’s in front of us now. Now it’s a different story, with new players. Anything is possible.”

Brazil has made it to the quarterfinals of the World Cup every time since 1994. Its last elimination in the second round was against Argentina in 1990. Chile has only once advanced past the second round, at home in 1962.

Brazil has four players going into Saturday’s match with a yellow card, including striker Neymar, captain Thiago Silva and defensive midfielder Luiz Gustavo. Another yellow against Chile will sideline them from the quarterfinals if Brazil advances.