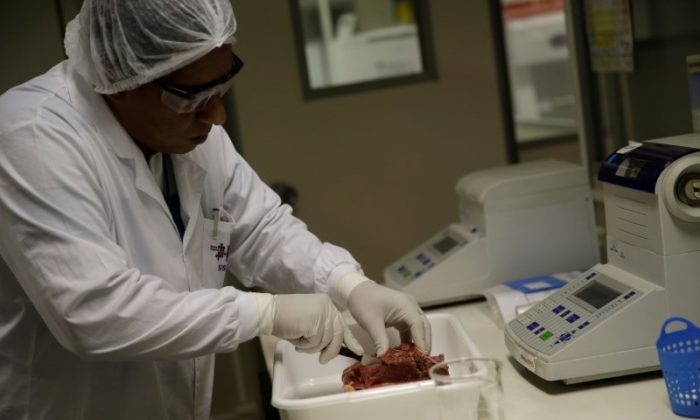 A veterinarian analyses a piece of meat collected by Public Health Surveillance agents during an inspection of supermarkets, at a veterinary laboratory with the public health department in Rio de Janeiro, Brazil on March 20, 2017. (REUTERS/Ricardo Moraes)
International

LAPA, Brazil—Brazilian authorities on Tuesday began scouring meat plants that were closed after a probe into corruption by health inspectors and the alleged sale of rotten products. Hong Kong dealt a blow to the world’s top beef and poultry exporter with an import ban.

Brazilian President Michel Temer’s government has moved quickly since Friday to both address and downplay the scandal in the meatpacking industry, one of the bright spots of an economy struggling with its worst recession on record.

It won a victory earlier on Tuesday when South Korea lifted a ban imposed a day earlier on all poultry imports from BRF SA, the world’s largest exporter of that meat.

But Hong Kong’s ban, which followed China’s decision to block imports of meat from the South American nation, showed the crisis was still not contained. China is the largest consumer of Brazilian meat, followed by Hong Kong.

The European Union also kept its ban on meat coming from four specific plants, while Chile maintained its total import ban. The U.S. Department of Agriculture started testing all shipments of raw beef and ready-to-eat products from Brazil for pathogens.

Brazil’s meat investigation is the latest involving federal police and prosecutors and comes on the heels of a massive corruption scandal involving billions of dollars in political kickbacks made by construction giants to win contracts with state-controlled firms, especially the oil company Petrobras.

That probe has ensnared scores of top politicians, including several ministers in Temer’s center-right government.

The operation targeting meatpackers resulted from a two-year investigation that culminated in raids on processing plants and company offices in seven states late last week.

Police have accused more than 100 people, mostly health inspectors, of taking bribes for allowing the sale of rancid products, falsifying export documents or failing to inspect meatpacking plants at all.

Among the companies targeted were the world’s largest meat producer, JBS SA, and BRF.

Both JBS and BRF strongly reject the accusations and have begun a publicity campaign in Brazil to safeguard their reputations and point out what they say are errors in information the police have disclosed.

Brazil’s government also has gone on the offensive against the police operation.

“We are confident there are no public health risks associated with Brazilian meat,” Luis Eduardo Rangel, secretary for standards at Brazil’s agriculture ministry, said before officials began audits of 21 meat plants named by police.

The inspections include a JBS unit that exports to China, the EU and other markets in the southern state of Parana, where the investigation was headquartered.

Luis Boudens, head of the national federation of federal police, defended the police investigation, saying that government and industry criticism was being made to protect an important sector of the economy and politicians.

“Federal agents have taken down a mafia of businessmen that bribed inspectors … and politicians to obtain certification to sell meat without any inspections,” he said in a statement on the federation’s website.