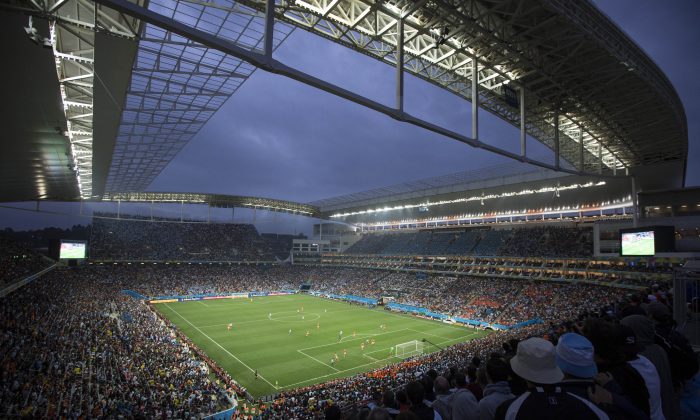 Photos that claim Brazilians are rioting for the country’s World Cup loss to Germany are still being spread around, but they’re fake.

In Sao Paulo, rioters set fire to buses, but the photos in question that were being spread weren’t real.

Photos taken a few years ago are being spread on Twitter, showing riots and demonstrations. The users have said the riots are currently going on right now, but it’s false.

Some of the photos were taken in 2013 or just a few months ago in Brazil. A few others show the 2011 riots in London, which were not related to soccer.

According to reports, Brazil will have a massive security detail for the final.

Here’s the Associated Press report on the development:

RIO DE JANEIRO (AP) — More than 25,000 soldiers and police, the biggest security detail in Brazil’s history, will be deployed around Rio de Janeiro to control Sunday’s World Cup final between Germany and Argentina at the Maracana Stadium.

Jose Mariano Beltrane, security secretary for the state of Rio de Janeiro, said there will be 9,300 Brazilian defense forces and at least 10,000 military police.

“This will be the biggest security operation that the city or country has ever seen,” Beltrane said Friday. “We need to ensure that this event goes off like all the other games in the World Cup.”

Asked about the large numbers, Beltrane said they were justified and also pointed out the increase in tourists and the presence of heads of state at the final.

“I prefer to have a great number of men rather than to be caught by surprise,” he said.

Beltrane gave no figures about levels of policing at previous matches at the Maracana.

Beltrane said policing would be stepped up around the stadium and in the south zone of Rio, which includes the famed Copacabana and Ipanema beach areas. He also said access to the stadium area would be limited to people with tickets.