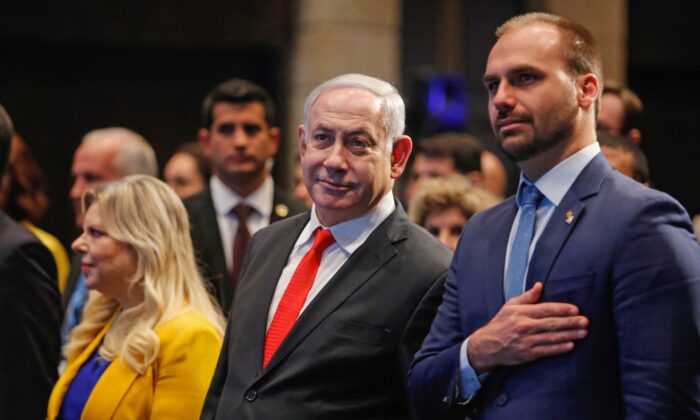 Brazil has officially opened a trade office in Jerusalem in a ceremony attended by President Jair Bolsonaro’s son and Israel’s Prime Minister Benjamin Netanyahu on Dec. 15.

It comes after Brazilian head of state Bolsonaro announced his country’s intention to move its embassy to the city in October 2018.

Speaking at the ceremony, Eduardo Bolsonaro, a senior lawmaker, reiterated that his father intended to make good on his previous pledge to move Brazil’s embassy in Israel from the city of Tel Aviv to Jerusalem.

“He told me that for sure—it’s a commitment—he’s going to move the embassy to Jerusalem, he’s going to do that,” the younger Bolsonaro said.

He did not specify what date the move will take place.

President Bolsonaro pledged to move Brazil’s embassy in Israel to Jerusalem following President Donald Trump’s controversial step to relocate the U.S. embassy from Tel Aviv to Jerusalem on May. 14, 2018, which coincided with the 70-year anniversary of U.S. President Harry Truman recognizing Israel an independent nation.

Bolsonaro’s economic team and Brazil’s farm lobby advised the president against the deal, for fear of damaging trade ties with Arab countries. Brazilian Vice President Hamilton Mourão, a retired army general, told Reuters in February that Brazilian Halal food exports worth $5 billion would be hurt by the action.

It seems Bolsonaro has not been swayed in his view.

He added that Brazil is currently still studying the implications of transferring its embassy to Jerusalem, and stressed that when the relocation happens, it should inspire other Latin American nations to follow suit.

“If we’re doing this move in a smart way, for sure other countries will be comfortable to do the same, and that’s what we expect,” he said.

Meanwhile, Netanyahu noted that the trade office that opened this week was part of “President Bolsonaro’s commitment to open an embassy in Jerusalem next year” and praised Brazil’s “unbelievable potential.”

“The Apex office can help Brazil and Israel realize the potential of cooperation between us. Israel is perhaps the most dynamic, innovative nation in the world—this is not what I say, but many others are saying it. The markets are saying it,” Netanyahu said.

“Brazil has an unbelievable potential. With its vast size, its diverse population, its universities, the talents of its people. And we think that if we merge the great potentials that our two countries have, we learn from each other unbelievably. And this office, Apex, will actually be the spearhead of this vital development.”

On Dec. 13, President Bolsonaro referred to the opening of the trade office, known as Apex-Brasil, saying, “We believe in God and are looking for the best for the country.”

Of the 158 countries that maintain diplomatic relations with Israel, only the United States and Guatemala have moved their embassies to Jerusalem. However, Honduras is expected to follow suit in the near future.

Meanwhile, the Czech Republic, Hungary, and Australia have trade offices in the city, with varying diplomatic status. Slovakia and Ukraine have pledged to open similar missions in Jerusalem.

Other countries maintain their embassies in Tel Aviv.

Jerusalem has long been a source of contention among Israelis and Palestinians, with the former claiming all of Jerusalem as its capital, while the latter view East Jerusalem as the capital of their own future state.

The city’s status has yet to be resolved through Israeli–Palestinian peace negotiations.

When announcing the U.S. embassy move in 2017, Trump emphasized that specific boundaries of Israeli sovereignty in Jerusalem were still subject to final negotiations and that he was prepared to support a two-state solution if agreed to by the parties.