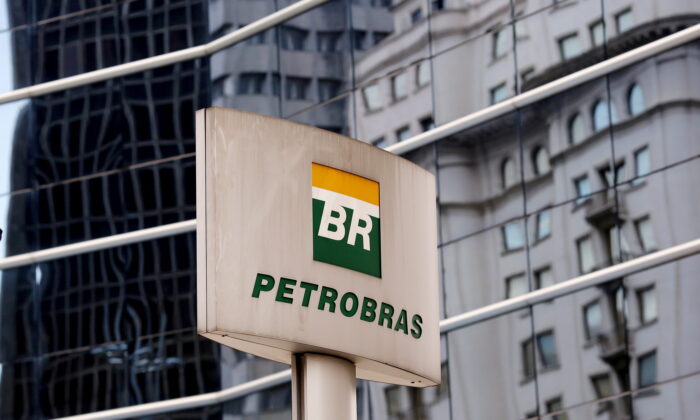 The Petrobras logo in front of the company's headquarters in Sao Paulo, Brazil, on April 23, 2015. (Paulo Whitaker/Reuters)
Business & Economy

HOUSTON—Brazil’s government has appointed former Petrobras executive Rodolfo Landim to chair the state-controlled oil producer’s board, the company said in a filing on Saturday night.

Earlier in the day, Admiral Eduardo Bacellar Leal Ferreira told Reuters he planned to step down as chairman of Petroleo Brasileiro SA, as the Rio de Janeiro firm is formally known.

“Petrobras chairman is a 24-hour job and I want to spend more time with my family,” Ferreira said, adding he has two grown children living outside of Brazil.

Ferreira will stay until the end of his term. A shareholder meeting to renew the company’s board is scheduled for April 13.

The replacement comes as Petrobras faces pressure from investors to raise fuel prices. The company controls gasoline and diesel prices in Brazil with more than 80 percent of the country’s refining capacity.

Rodolfo Landim made a career at Petrobras before creating his own oil company, Ouro Preto Oleo e Gas, and selling it to investors in 2020.

He first joined Petrobras in 1980 and worked for 26 years at the company, rising to head of the natural gas division. In 2003, during the first presidential term of Luiz Inacio Lula da Silva, Landim was appointed by the government as chief executive of Petrobras’s gas station chain subsidiary, the largest fuel retailer company in Latin America. He ran the fuel company until 2006.

Landim currently runs a soccer team in Brazil as its president.

His confirmation as chairman is expected as the government controls the board with a majority of the voting shares.

In a weekly social media address, Bolsonaro said he was certain Petrobras would do what is necessary to shield consumers from suffering steep price increases.

Bolsonaro’s comments come after Petrobras in 2021 smashed its all-time record for annual profit and dividend payouts, thanks to sky-high Brent prices.

On Wednesday, Chief Executive Joaquim Silva e Luna told Reuters that Petrobras had not yet taken a decision on fuel price adjustments.

The government also appointed another seven names to the board. Those are Petrobras Chief Executive Joaquim Silva e Luna, who will have his term at the board renewed, Carlos Eduardo Lessa Brandão, Luiz Henrique Caroli, Márcio Andrade Weber, Murilo Marroquim de Souza, Ruy Flaks Schneider, and Sonia Julia Sulzbeck Villalobos.