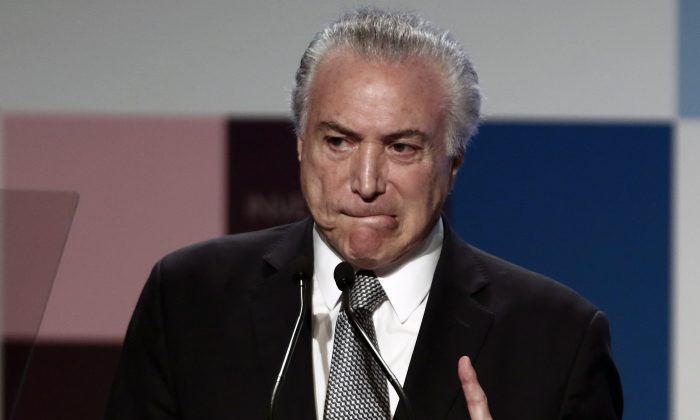 BRASILIA—Brazil’s top electoral court on Tuesday began hearing a landmark case about illegal campaign funding that could lead to the removal of President Michel Temer less than a year after he took over from impeached leftist Dilma Rousseff.

The case before the Supreme Electoral Tribunal (TSE) could annul the 2014 election won by Rousseff and her running mate Temer, prolonging the political instability that has deepened a recession in Latin America’s largest nation.

It is the first time the TSE will decide on the mandate of a sitting president, and a decision by a majority of the seven-judge tribunal to annul the ticket would end Temer’s short presidency and require Congress to elect a successor within 30 days.

The removal of a second president in less than a year would stir political turbulence just as Brazil’s economy is showing signs of emerging from its worst recession on record and hit business confidence as the country seeks to recover its investment grade credit rating.

“It would create more confusion,” former president Fernando Henrique Cardoso, of the PSDB party, warned in a radio interview on Monday, urging the court not to make a decision that would scare off investment.

Temer’s assumption of office in May, and his pledges to cut a gaping deficit and reform pension laws, helped make Brazil’s currency and stock market among the best performing in the world last year as investors welcomed a shift toward a more business-friendly agenda after 13 years of Workers Party government.

The TSE judge tasked with studying the case, Herman Benjamin, is expected to recommend in a 1,086-page report submitted last week that the court invalidate the 2014 election.

However, the court could decide to throw out the case because Rousseff is no longer in office or declare her election victory void but decide that Temer had no responsibility in the illegal funding. That would allow him to be a candidate for indirect election by Congress, where his coalition holds a majority.

The strategy of Temer’s lawyers is to delay proceedings as long as possible and appeal any adverse ruling so that the case is not decided until after the next presidential election in October 2018, sparing him removal from office.

The TSE has scheduled four sessions this week to hear the case but any judge can ask for time to study Benjamin’s report, postponing the process for weeks if not months.