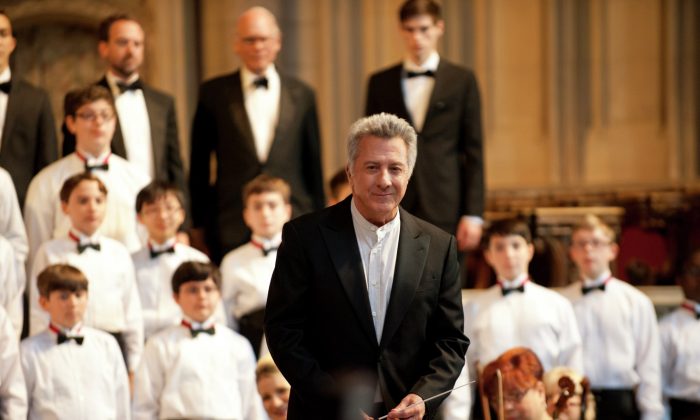 It’s his biggest movie yet, with an A-list cast that includes Dustin Hoffman, Josh Lucas, and Kathy Bates, but Canadian director François Girard will likely only watch it once.

Some would call it a quirk, but for Girard, it’s just the way he does it.

“You never finish a movie. You don’t finish a movie, you abandon it. That’s the way it is. But I never look back,” Girard told the Epoch Times on his way down the red carpet for the premiere of “Boychoir.”

He’s not kidding. After the premiere, Girard said he never watches one of his films again. The only exception was “Thirty Two Short Films About Glenn Gould,” which had a special presentation at TIFF—15 years after the fact.

“That was the only time I saw one of my films after the premiere. So tonight I am going to see the film, and chances are I am not going to see it for the next 20 years,” he said.

“There is a moment where you have to move on and live something else. And that was a very intense 14 months where all my life was that, and those characters were my companions.”

The movie stars Garrett Wareing as a troubled 11-year-old orphan who ends up at an elite choir school after his single mother dies. The willful boy butts heads with the choirmaster, played by Dustin Hoffman, a hardliner who sees the potential in this angry kid.

The film hinges on Wareing’s performance, and Girard says that unlike more seasoned actors who appear in the film, such as Eddie Izzard, they weren’t sure the young actor could pull it off.

“Eddie Izzard, you can screen what he’s done and you can get a feel of his level, his skills. But a young man of 12, 13 years old, he hasn’t done the work that allows you to do that.”

Girard said casting director John Papsidera screened 1,000 boys, and Girard reviewed 200, before they settled on Wareing. But even then, doubt remained.

“Eventually you see Garrett and you say ‘maybe, maybe’ but there’s no certitude. Like you watch Eddie’s work and it’s clear he’s a genius. But the kid, you have to go through the process of bringing him for the first test, second test, screen test, put him in costume…”

Beyond playing the role, Girard said they wondered if Wareing could handle the pressure.

“Eventually you say ‘let’s go.’ But even when you say ‘go’ there’s still a spinning coin and you’ll need to go through the shoot to see the bottom of it. We got lucky, really lucky. You’re going to see Garrett on this red carpet again and again. This is the beginning of a career.”

The film also stars Debra Winger as the school headmistress, Bates as principal, and Kevin McHale of “Glee” fame as a teacher. No word yet on when “Boychoir” will hit theatres.