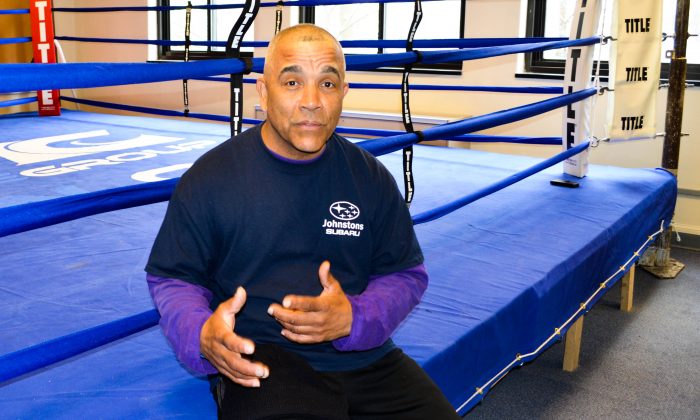 MIDDLETOWN—Francis Santiago wants to teach young men boxing. Middletown likes this idea and has given Santiago rooms at the Parks and Recreation Center to build a gym.

The main skill his students will learn at his boxing gym is not the jab or the uppercut but respect. “That’s the main thing: having respect—not just for me but at home.”

Santiago’s grandson Jose Bonilla wants to reach the top. “I want to make something of myself. I want to go pro.” He already has a Junior Olympics title under his belt.

Bonilla trains to fight as a 115-lb super flyweight. “I have a passion for doing it. I want to hold the belt. With boxing, the possibilities are endless,” he said. On his way to the top, “I want to have my grandfather by my side.”

Joseph Tejada, 15, came to box because he and Jose had been friends for many years. Tejada took up wrestling in high school but was always aware of Jose’s boxing skills and those of other friends.

I’m just hoping that he takes me under his wing and teaches me what he knows.
— Joseph Tejada, on training with Coach Paco

“I’ve always seen how good Jose is,” he said. “I want to catch up to them as quickly as possible. I know they are going to help me move a little faster.”

Tejada hopes Coach Paco will help, too. “I’m just hoping that he takes me under his wing and teaches me what he knows.”

Santiago, 56, sees himself as a second father. He tells the boys’ dads that he is someone else that the young men can talk to and confide in. “You feel down, you feel lonesome, you want to talk to somebody. I’m here.”

The boys who Santiago teaches come from tough neighborhoods. Some get into trouble on the street. Coach Paco is building his gym to get kids off the street. “I tell them that boxing is a way out of the street.”

The boxing program is really what the kids need as a way to get them not do bad things. It’s good for the whole community.
— Jose Bonilla

Bonilla said, “the boxing program is really what the kids need as a way to get them not do bad things. It’s good for the whole community.”

Many young men need the discipline that can only be given by a father. Santiago’s rules are tough: “There’s no hanging out on the street. Eating the right food. There’s no drug involvement to make it to the top. You want to make it, you got to put in 100 percent.”

He tells his students that many great boxers succeeded because they found a good coach, “someone who led them the right way. That’s what I’m trying to do right now with these kids.”Santiago has nine kids of his own and said he is trying to treat those he teaches boxing like his own kids.

He advises his fighters to stay in school. “A lot of kids, they want to drop out early. Boxing gives them a little boost. I tell them: ‘Keep in school because school lasts forever. Boxing is only a period of time that flies by.'”

Isaiah Soto, 14, has some training but wants to improve to box professionally in the light weight division. He hopes Coach Paco can teach him the proper way to “snap punch, to open up angles, getting in and out and not get touched, work on my weaving and blocking.”

Until recently, young men have wanted to box, but Middletown had no facilities. Commissioner of Parks and Recreation, Christine Brinckerhof, heard about Santiago’s dream and jumped in. Middletown employed Santiago as the city’s boxing coach.

It took a community to make this happen. This has cost the city nothing.
— Christine Brinckerhof, commissioner, Department of Parks and Recreation

Donations poured in. “It took a community to make this happen. This has cost the city nothing,” Brinckerhof said. Santiago worked for almost 30 years at Johnstons Toyota. Owner Steve Jardine has been especially supportive of the boxing program and donated equipment.

Rooms on the third floor of the Recreation Center were available and Santiago filled them with standard boxing and weight equipment. One room has bags and a full-sized competition ring 23 feet square on a three-foot platform.

Boxers can shadow box and jump rope in another room with mirrors.  Weight equipment will fill a third room. A cubby hall closet will store supplies and act as the coach’s office.

The gym has not officially opened, but Santiago said, “thanks to Chris, they have a place and they are starting to come in now little by little.”

Brinckerhof says the gym will be for more than young men to train for competitive boxing. Kids can sign up for six-week clinics one night a week to see if they like the sport. Here they will learn non-contact boxing skills—footwork, glovework, “how to protect yourself, how to swing.”

Boxing shows are planned for the summer. The family-oriented events will show the community “what boxing is all about,” Santiago said. The events will ensure safety for the boxers—headgear, good referees, and medical backup. Fights will stop if a boxer gets hit hard or has a nose bleed.

The boxers learn how to protect themselves. Santiago wraps Tejada’s hands before the young man hits the punching bag. “You gotta protect the knuckles.” Boxers wear headgear in the Middletown ring, but Santiago said Olympic boxing no longer requires headgear.

Young boxers need a passbook to spar in the ring. The “book” is given by the USA Boxing Association which governs Olympic-style amateur boxing. “You can’t do that until you get past the certified coach’s ‘Yes, you can,'” according to Brinckerhof. “He knows who’s ready and who is not.”

Santiago tells it like it is: “Getting hit is no joke. Boxing is not for everybody.”

Some young men want to fight in the ring but soon change their minds. “They get hit and—I don’t lie to you—they don’t come back.” He makes this very clear to parents. Unlike basketball, “you’re not throwing a ball in a basket. This is boxing.”

The boxing program will develop in phases. In the first year of operation, the gym will train boxers to compete at  the national and Olympic levels. “That’s my goal: take them to the second level.”

In a few years, Santiago expects some to be ready to turn pro, the third level of competition. Santiago aims high. “Hopefully, we will get a couple of champs out of the gym to represent Middletown in the Olympics.”