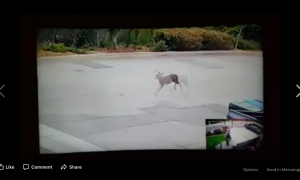 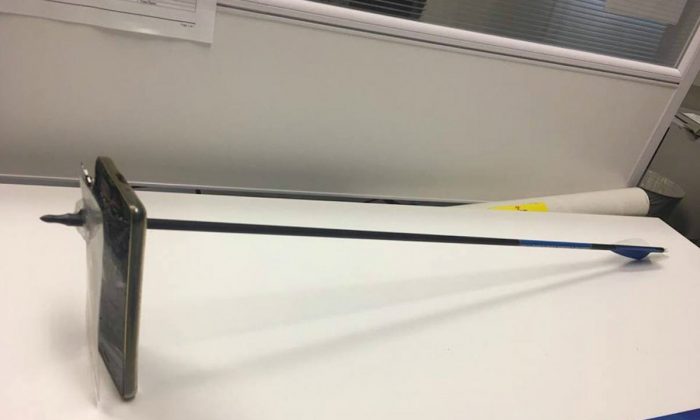 A mobile phone with an arrow embedded in it in the town of Nambin, New South Wales, Australia. (New South Wales Police)
Australia

An Australian man had a lucky escape when an arrow skewered his phone just as he lifted it up to his face to take a photograph.

Australian police announced that a 39-year-old man had been charged after allegedly firing a bow and arrow in the busy seaside town of Nimbin on March 13.

The phone was driven into the chin of the unnamed owner by the force of the impact.

A man has been charged after he allegedly fired a bow and arrow at another man in Nimbin today. About 9am (Wednesday…

“A 43-year-old man drove into his driveway on Nimbin Road and got out of his car,” said New South Wales police in a statement. “He noticed another man, who is known to him, standing outside his property allegedly armed with a bow and arrow.”

According to the police, that resident then held up his phone to photograph the man “who then engaged the bow and was ready to fire.”

“It’s alleged the man fired the arrow at the resident which pierced through the man’s mobile phone causing the phone to hit him in the chin. It left a small laceration that didn’t require medical treatment.”

The police released photographs of the phone, skewered by the arrow.

The 39-year-old man was arrested at the scene and has been charged with being armed with intent to commit an indictable offense, assault occasioning actual bodily harm, and malicious damage.

The town of Nimbin is known as a popular hippie town, with a reputation as Australia’s marijuana capital.

In recent years, the police presence has been bolstered amid a crackdown on sellers of marijuana and other drugs.

Bows and arrows are far less commonly used as criminal weapons of assault than guns or knives, but can be very dangerous, together with their cousins the bolt and crossbow.

Driving With An Arrow in Her Face

In January, the devastating effect of a crossbow was shown in the gruesome images of an Arkansas woman who was shot in the face with a crossbow after stepping in front of her 14-year-old son and 15-year-old nephews.

She survived, and drove herself to the hospital with the arrow in her face.

Janet Partain said that she went to the home of her neighbor, 34-year-old Joseph Avellino, to confront him about stolen property.

“I told him, Joseph I don’t want you on my property no more, this and that. And he was like, ‘Well I’m going to shoot ya’ll,’” Partain told WREG.

Partain said that Avellino produced a crossbow and pointed it at the teens.

“(He) was pointing the arrow at them and he fired a shot at one of them, and I pushed them out the way and I got hit,” she said. “I think I was in shock because once I got hit I said, ‘I can’t believe you almost shot that kid.’”

Partain then hopped in her car and drove herself to the hospital.

“It was an odd sight to see someone with an arrow in their face and they’re still conscious and talking to me,” said Capt. Jeff Nichols with the Cross County Sheriff’s Office

A picture shows a visible scar underneath Partain’s left eye with stitches inserted to hold the wound together after treatment.

A day after being shot, she was recovering in the hospital. “My face is throbbing and I can’t shut one of my eyes,” she told WREG.

The Cross County Sheriff’s Office said that Avellino was arrested on Feb. 11 after getting a call about the incident.

“Deputies ascertained that the victim was shot in the face with a crossbow after an altercation,” the office stated. Avellino was charged with first-degree battery and three counts of endangering the welfare of a minor, all felonies.