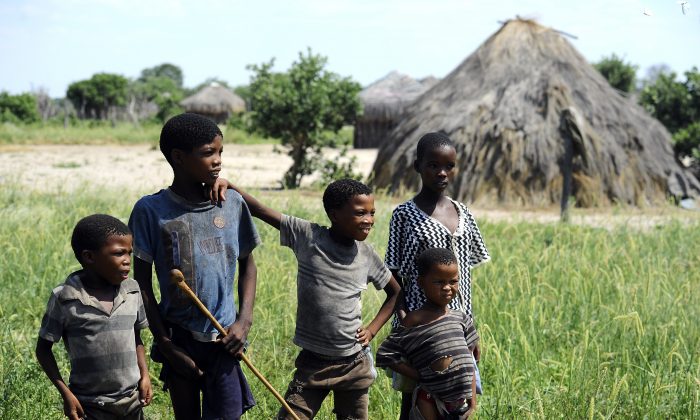 A file photo of young Kalahari Bushmen posing for a photograph outside a traditional hut in Molapo, in the center of the Kalahari Game Reserve in Botswana on Feb. 18, 2012. The Bushmen won a long battle with the Botswana government to secure new wells. Though personal freedoms of Botswana citizens are still limited in some ways, the nation is highly tolerant compared to other African nations and many other nations in the world. (Stephane de Sakutin/AFP/Getty Images)
Africa

In an index of 142 countries that measures personal freedom, the only country in Africa that shows a high level of freedom and social tolerance is Botswana.

Botswana’s place amid mostly middle- to lower-ranking nations is based in a history of respect for tribal lands and long-sighted economic development, according to the public policy organization Legatum Institute, which published the 2012 index.

May 21 is the United Nations World Day for Cultural Diversity, a time to reflect on tolerance. The Legatum Institute also notes that tolerance and economic prosperity grow together.

Botswana avoided the conflicts over resources and unrest that have plagued its neighbors by reinvesting mining revenue in infrastructure, health, and education, according to Legatum. The U.S. Department of State also praises Botswana a model African nation, while recognizing its shortcomings.

“[Botswana is] an advocate of and model for stability in Africa,” states a February 2013 Department report. “In its 46 years since independence, Botswana has consistently maintained a democratic government, responsibly managed its natural resources, and invested in its people and infrastructure.”

The 2012 U.S. Department of State human rights report on Botswana did show some alleged problems in prisons, including unconfirmed reports of inmate abuse. There was one case, still being investigated, in which the government allegedly killed two poachers unlawfully. Security forces shot and killed the poachers after they entered the country illegally in a canoe from Namibia.

The Department also found that staffing shortages led to a backlog of pending cases, impacting the right of citizens to fair public trials.

There is some use of child labor in agricultural and other work. Some discrimination also exists against the San ethnic group, some police corruption exists, and there are some limits on press freedom.

A large portion of Asia, Eastern Europe, and North Africa are colored red on the Legatum index map—the color code for the 30 lowest-ranking countries for personal freedoms.

The index places at the top of the list Canada, New Zealand, and Australia. At the bottom of the list are Yemen, Iraq, and Egypt.