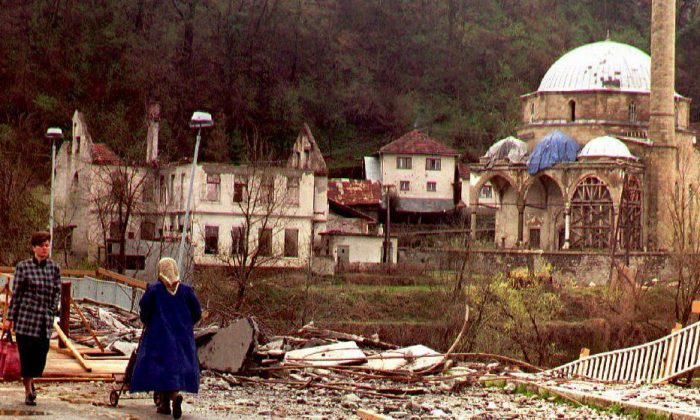 SARAJEVO—The government of Bosnia’s autonomous Serb Republic set up panels on Feb. 7 to re-examine the number of victims in Srebrenica and Sarajevo during Bosnia’s 1992-1995 war, a move Western countries view as a push to revise history.

Bosnia is formed out of the Serb Republic and a federation representing its ethnic Croat and Muslim Bosniak communities, under the peace deal that ended the bloodiest of the 1990s wars that followed the breakup of Yugoslavia.

A massacre of Muslim prisoners in the town of Srebrenica and the long siege and bombardment of the multi-ethnic capital Sarajevo were two of the most notorious crimes of the war, both of which have led to convictions of Serb leaders for genocide.

The Serb region accepted a report in 2004 which endorsed the internationally accepted account that Serb forces killed about 8,000 Muslims in and around Srebrenica. But lawmakers asked the government in August to revoke that report.

The move was initiated by the region’s then president Milorad Dodik, a nationalist advocate of the Serb Republic’s secession from the rest of Bosnia, who is now chairman of the tripartite presidency of the whole country.

Though acknowledging a crime occurred, Dodik says the numbers of those killed was exaggerated while the number of Serbs killed in the capital Sarajevo was underestimated.

Serb Republic’s Bosniak Vice President Ramiz Salkic condemned the government move as the denial of genocide and other proven war crimes, and an insult to victims.

“The government’s act in the long-term will produce instability, distrust and endanger peace,” he told news agency Fena.

The region’s Justice Minister Anton Kasipovic said the panels were aimed at collecting relevant data and facts about victims in both towns.

“This is a delicate and complex issue. The basic aim is to clarify all the facts about horrendous sufferings for the sake of the victims and their descendants,” Kasipovic said. The government said the panels include experts from 12 countries.

The European Union has said it rejects any denial, relativisation or misinterpretation of genocide in Srebrenica. The United States has also said attempts to reject or amend the report on Srebrenica “are part of wider efforts to revise the facts of the past war, to deny history and to politicise tragedy.”

Around 100,000 people, mainly Bosnian Muslims of whom roughly half were civilians, were killed during the Bosnian war as Bosnian Serb forces, backed by Belgrade, seized swathes of Bosnia and drove out non-Serbs after it voted to secede from Yugoslavia.