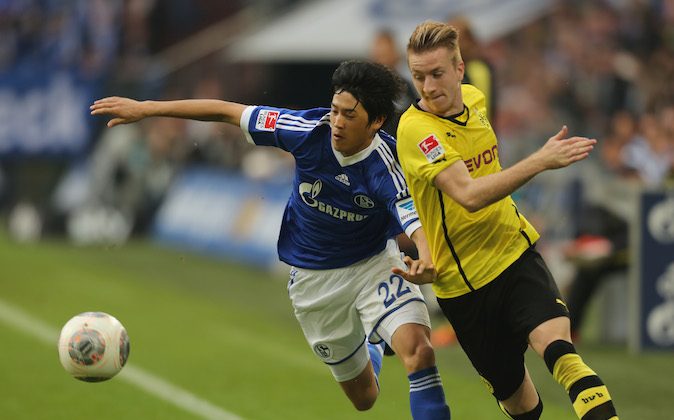 Atsuto Uchida of Schalke (L) and Marco Reus of Dortmund fight for the ball for the ball during the Bundesliga match between Schalke 04 and Borussia Dortmund at Veltins-Arena on October 26, 2013 in Gelsenkirchen, Germany. (Photo by Juergen Schwarz/Bongarts/Getty Images)
Soccer

The game will be broadcast on ESPN UK/HD in the United States.

Dortmund will miss long-term absentees Jakub Blaszczykowski and Neven Subotic (both knee) and Ilkay Gundogan (back), and Sven Bender and Marcel Schmelzer (both groin).

Dortmund have won 3 and loss 2 of their last five matches (WLLWW).

Schalke have won 3 and loss 2 of their last five matches (WLWWL).

Dortmund are favorites to take this tie.

Dortmund vs. Schalke is usually one of the highlights of the Bundesliga season, a grudge match between two neighboring clubs with little love lost between them and whose supporters often clash.

In the standings, Dortmund has a one-point lead and wants to consolidate its second place.

Police will have 3,000 officers on the scene, with another 1,000 security staff provided by Dortmund.

Schalke has won seven of its last nine in the Bundesliga and is striving to reach second place for the first time this season.