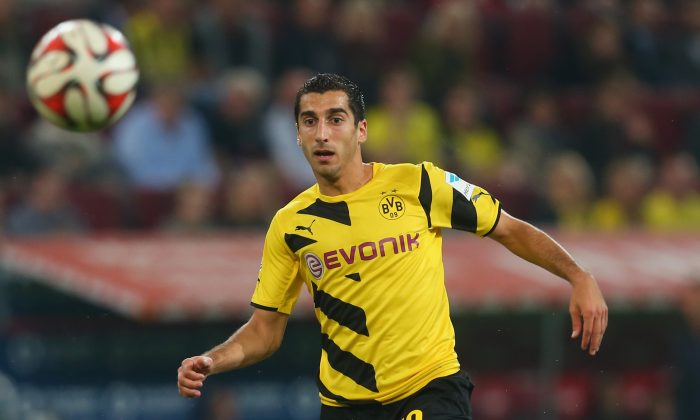 Henrikh Mkhitaryan of Dortmund runs with the ball during the Bundesliga match between FC Augsburg and BVB Borussia Dortmund at SGL Arena on August 29, 2014 in Augsburg, Germany. (Photo by Alexander Hassenstein/Bongarts/Getty Images)
Europe

Borussia Dortmund and Freiburg are set to play in a Bundesliga match on Saturday, September 13.

The game will be broadcast on Sky Bundesliga 4/HD and Sport1.FM,  in Germany.

See an AP preview of this weekend’s Bundesliga action.

The Bundesliga is Back: Some Things to Know

Here are some things to know about this weekend’s Bundesliga games:

The attacking midfielder was ruled out for four weeks with a left ankle injury sustained in Germany’s European Championship qualifier against Scotland. A similar injury had ruled Reus out of Germany’s World Cup-winning campaign.

New signing Ciro Immobile was stretchered off at the end of Italy’s win over Norway, though the Italian striker’s injury is not as serious as initially feared.

A muscle injury picked up in training will rule Jakub Blaszczykowski out for a further four weeks. The Poland midfielder already missed the second half of last season after damaging cruciate knee ligaments.

Midfielders Ilkay Gundogan and Nuri Sahin are also on Dortmund’s injury list, meaning Japan star Shinji Kagawa is likely to make his first start for the club since his return after two frustrating seasons at Manchester United.

“He’ll get playing time, but I don’t want to say whether he’ll start,” Dortmund coach Juergen Klopp said on Thursday.

Kagawa isn’t the only player likely to make his season debut for a new club this weekend.

Mehdi Benatia should start for Bayern Munich against Stuttgart. The Moroccan defender was signed from Roma for a reported 26 million euros ($34 million) to fill the gap after Javi Martinez tore knee ligaments.

Benatia was rejected five years ago by Freiburg.

Lewis Holtby is likely to make his first appearance for Hamburger SV at Hannover on Sunday. The former Schalke attacking midfielder endured a frustrating one and a half seasons in the Premier League at Tottenham and Fulham.

Experienced Ivory Coast striker Salomon Kalou could start for new club Hertha Berlin against Mainz on Saturday. Kalou won the Champions League with Chelsea in 2012, beating Bayern in its own stadium in the final.

Mainz will also have debuts, including Sami Allagui, who returned to his previous club from Hertha due to Kalou’s arrival. Mainz made five signings in the last three days of the transfer period.

No Bundesliga side has made a better start to the season than Leverkusen. The team has won all five games across all competitions under new coach Roger Schmidt, while it is on a seven-game winning run altogether.

Part of the side’s success is down to attacking straight from kickoff. Karim Bellarabi scored in the ninth second against Dortmund for the Bundesliga’s quickest ever goal in the opening match.

However, club captain Simon Rolfes and forward Julian Brandt are both out several weeks with ankle injuries. Rolfes had started each of Leverkusen’s five wins.

Midfielder Lars Bender’s return from a thigh injury is a timely one. Leverkusen hosts Werder Bremen on Friday.

Franck Ribery’s declaration of health has come at the right time for Bayern, which has seven games in 22 days coming up.

“I feel good and I’m ready for Saturday,” said the Frenchman, who had been plagued by a knee problem and looks set to make his season debut against Stuttgart.

Ribery is sticking by his decision to retire from international duty despite criticism from UEFA President Michel Platini.

Xabi Alonso, who impressed on his Bayern debut in the 1-1 draw with Schalke, is laboring with a foot injury. Javi Martinez, Bastian Schweinsteiger and Thiago Alcantara are all still out, meaning Philipp Lahm is likely to start in midfield again.

Hamburg, Wolfsburg, Schalke and Stuttgart each have only one point from their opening two matches, and all face tough away games this weekend.

Stuttgart coach Armin Veh is already under pressure on his return to the club he led to the Bundesliga title in 2007. Defeat at home to promoted Cologne has reopened old debates about leading figures, character and commitment. Another poor showing on Saturday would prompt talk of crisis at the club.

Slomka has been under pressure since he took over and barely steered Hamburg away from relegation last season. In 16 away games with Slomka in charge, Hamburg has claimed only one point.

Schalke coach Jens Keller has had to endure perpetual speculation over his future, while Wolfsburg’s Dieter Hecking is supposed to be leading his expensively assembled side toward Champions League qualification.

All need improvement, and quickly.