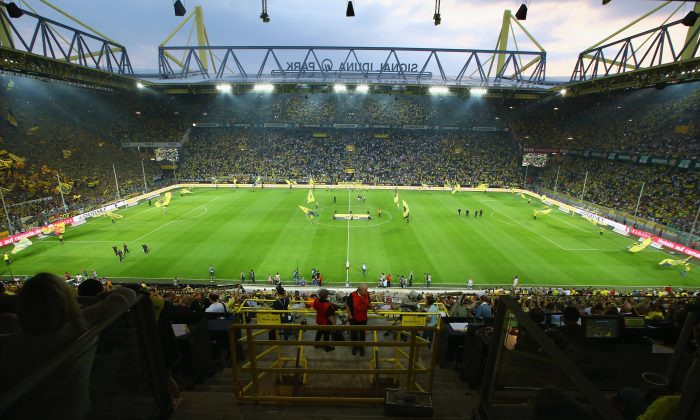 General view of the Signal Iduna Park prior to the Bundesliga match between Borussia Dortmund and Werder Bremen at Signal Iduna Park on August 23, 2013 in Dortmund, Germany. (Photo by Christof Koepsel/Bongarts/Getty Images)
Europe

Borussia Dortmund and Bayern Munich are set to face off in a German Super Cup match on Wednesday, August 13.

The game will stream live on GOLTV USA in the United States.

Dortmund are 9/4 to win the Super Cup, while Bayern are 5/4 as per OddsChecker.

Robert Lewandowski will make his official Bayern Munich debut against his old club, Borussia Dortmund, in the Super Cup which kicks off the German football season.

Bayern swept the Bundesliga and the German Cup last season, so it faces host Dortmund, the league runner-up and losing cup finalist.

Here are five things to know about the match on Wednesday:

LEWANDOWSKI RETURN: Dortmund refused to allow Lewandowski to transfer to Bayern before his contract expired, giving up a hefty fee. Lewandowski was unhappy for not being allowed to leave, but that did not show in his performance. The Poland striker finished the season as the Bundesliga top-scorer with 20 goals. “It is going to be special for him, he played four years there with great success,” Bayern coach Pep Guardiola says.

ANGRY DORTMUND: Dortmund was angry when Bayern chairman Karl-Heinz Rummenigge revealed that star forward Marko Reus had a buyout clause in his contract that would allow him to leave Dortmund before the end of his deal in 2017. Dortmund said it was clear that Bayern was again trying to lure away one of its players, in similar style to acquiring forward Mario Goetze a season ago. Bayern then also picked up Lewandowski when the Pole became a free agent, after unsuccessfully trying to sign him earlier. Neither Reus nor Goetze are expected to play. Reus missed the World Cup because of injury. Goetze, who scored the winning goal in the World Cup final against Argentina, only recently returned to training.

MISSING STARS: Neither team is expected to use many players from Germany’s World Cup-winning team. The players only recently returned to training after extended vacations, and are not fit yet for full-time duty. Bayern coach Pep Guardiola says only eight, nine players are really fit for a full match, indicating he may use some young players. At the same time, Guardiola dismissed media reports that midfielder Thiago Alcantara will be out until October, saying, “Thiago will be back earlier.” One of Bayern’s World Cup stars, goalkeeper Manuel Neuer, says the team will field a lineup “capable of beating Dortmund.” Dortmund will be without new captain Mats Hummels, who began training only on Monday, along with Reus. The injured list includes Nuri Sahin, Jakub Blaszczykowski and Ilkay Gundogan.

BIG RIVARLY: The two top German clubs have developed such a rivalry that “in principle, there are no friendly matches when Bayern and Dortmund face each other,” according to Neuer. Guardiola says this is “the first title of the season … a final is not a test.” Dortmund coach Juergen Klopp says playing Bayern is “always special but losing this match is not a big deal and it won*t have an impact on the Bundesliga season.” Dortmund beat Bayern 4-2 in the Super Cup last year, in Guardiola’s first official match as Bayern coach, but Bayern swept the domestic double.