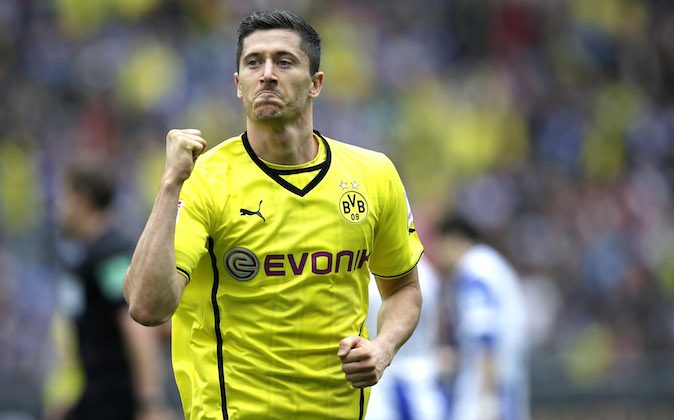 The Borussia Dortmund vs Bayern Munich German Cup final is set for Saturday, May 17.

The game will also air on Univision Deportes and ESPN3 in the United States.

Live stream is available on ARD Live Stream and WatchESPN.

BERLIN— Bayern Munich and Borussia Dortmund will meet in a fitting German Cup final on Saturday.

Germany’s top two sides for the last three seasons meet for the end-of-season title in Berlin’s Olympic Stadium for the second time in three years.

Bayern, which defeated Stuttgart in last year’s final, is aiming to avenge its humiliating 5-2 loss to Dortmund in the 2012 final and complete the league and cup double in Pep Guardiola’s first season in charge.

But Dortmund, which finished runner-up in the Bundesliga and – like Bayern – was knocked out of the Champions League by Real Madrid, is the domestic rival Bayern fears the most.

Here are five things to know about Saturday’s match:

Robert Lewandowski will be playing his last game for Dortmund against his future side. The Poland striker signed a five-year deal effective July 1 with Bayern last January, after Dortmund failed in its attempts to extend his four-year contract.

Rather than cash in on a transfer fee and allow Lewandowski leave last year, Dortmund opted to improve his conditions for the remaining year of his contract and lose him for nothing.

The 25-year-old Lewandowski repaid the club with 20 league goals, six in the Champions League and two in the German Cup. Altogether, he scored 74 goals and set up 31 more in 131 Bundesliga appearances for Dortmund.

“And we’ll have to do without this quality in the future. That’s bitter,” Dortmund coach Juergen Klopp said.

History is on Bayern’s side. The Bavarian powerhouse has played 20 of 71 German Cup finals – a record – and won 16 of them, also a record.

Werder Bremen is next with six cup wins, followed by Schalke with five. If Dortmund wins on Saturday it will join Nuremberg, Cologne and Eintracht Frankfurt with four.

Saturday’s match will be the 102nd competitive meeting between Bayern and Dortmund. Bayern has 46 wins to Dortmund’s 25, with 30 draws between the sides.

Dortmund won most recently, 3-0 in Munich on April 12, while Bayern won the previous Bundesliga clash, also 3-0, in Dortmund on Nov. 23, when Mario Goetze scored against his former side.

This will be the fourth final in six years between the sides. Bayern defeated Dortmund 2-1 after extra time in the 2008 German Cup final thanks to two goals from Italian forward Luca Toni.

Interest is huge. Dortmund had more than 300,000 requests for tickets. The sell-out Olympic Stadium will only take 76,197.

About 13.55 million viewers in Germany watched the final the last time these sides clashed and Saturday’s game will be shown in 182 countries, more than ever before.

Dortmund chief executive Hans-Joachim Watzke, who helped steer the club to sound financial footing after it teetered on the brink of bankruptcy in 2005, is enjoying his side’s rivalry with Bayern, despite the pain of seeing Goetze and Lewandowski switch sides in the past couple of seasons.

“In recent years we’ve at least shown that we can defend ourselves and that we don’t have this humility (to Bayern) that has recently become commonplace in the Bundesliga,” Watzke said. “We always want to beat Bayern Munich.”

He rejected suggestions of Bayern’s poor form – Dortmund has won seven of its last eight games since losing in Madrid compared to just six wins from Bayern in 11 games.

“At the end of March everyone was writing that Bayern were the best team in the world, and that it would carry on for another 20 years,” Watzke said. “Four weeks later everything is suddenly bad. What are we talking about exactly?”

Bayern sporting director Matthias Sammer, a former Dortmund captain and then coach, has demanded full commitment from his side.

“I expect a side on the pitch in which everyone, from a sporting perspective, says, ‘I’ll die for my teammates.’ Everyone has to give everything for the side and sacrifice himself,” Sammer said.

Franck Ribery is likely to feature only as a substitute due to back problems.

“I feel good but for it’ll be difficult for 90 minutes,” said Ribery, who stressed the importance of Saturday’s game. “If we lose, it’s no longer a good season.”

Bastian Schweinsteiger, who is aiming for a record seventh German Cup win, is doubtful due to a tendon strain in his left knee. Thiago Alcantara is definitely out and will miss the World Cup for Spain after a recurrence of his right knee injury.