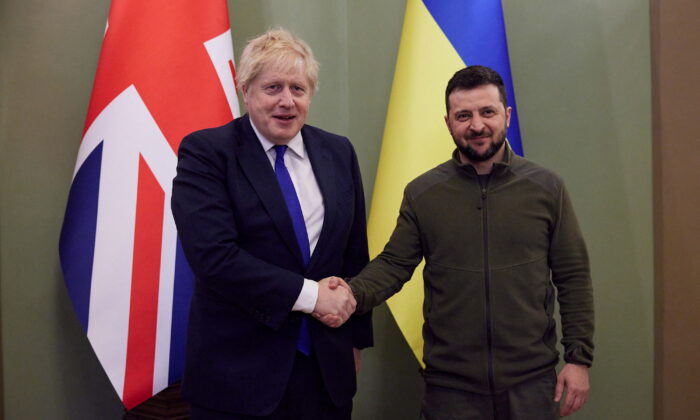 When Callista showed me the more than 2-minute video of British Prime Minister Boris Johnson and Ukrainian President Volodymyr Zelenskyy walking around Kyiv, I immediately thought of another recent video of President Joe Biden bicycling around New Castle, Delaware (which he does nearly every weekend). I was struck by the difference in seriousness, competence, and courage.

Johnson is not alone in showing a willingness to provide visible support for Ukraine’s fight against Vladimir Putin. In mid-March, the leaders of Poland, the Czech Republic and Slovenia traveled to Kyiv on a European Union mission.

Biden got within an hour of Ukraine when he was in Poland, but then he jumped on Air Force One and flew west to America instead of east to Kyiv.

Of course, failing to show leadership and seriousness is normal for the Biden presidency.

According to Newsweek, in his first year, President Biden “has taken 42 personal trips totaling 126 days. Of those, 73 have been spent in his Wilmington, Delaware home—spread over a total of 25 trips; 16 days at Rehoboth Beach, Delaware over the course of five trips, and 37 days at Camp David over 12 different trips.”

Newsweek continued: “He has become the President who has spent the most time on personal travel in the inaugural year of their administration.”

There is a war in Ukraine which may determine if the world’s future is led by democracies or dictatorships. Biden bicycles.

There is a growing disaster on our southern border with an estimated 18,000 people a day (the equivalent of the city of Atlanta every month) expected to illegally cross the border. Biden bicycles.

There is an artificial energy crisis with skyrocketing gasoline prices because of the Biden administration’s anti-American energy policy. Biden bicycles.

The price of food is skyrocketing, and Americans are suffering. Biden bicycles.

There is a growing worldwide shortage of wheat, fertilizer, and other agricultural products because of the Russian invasion of Ukraine. Biden bicycles.

There is an epidemic of homelessness and violent crime across the country (mainly in cities controlled by Democrats). Biden bicycles.

There is a crisis of education which could soon make it impossible for the United States to compete with China. Biden bicycles.

Health care costs are out of control and creating problems for nearly every American family’s budget. Biden bicycles.

Day by day, we learn more about Hunter Biden’s illegal activities—and how his foreign money was passed through to his father. Biden bicycles.

So, bicycling and laughing are the two symbols of the Biden administration.

Watching the British Prime Minister join the leaders of Poland, the Czech Republic, and Slovenia, while the American President hides in Delaware may be the most humiliating international performance by any American president in modern times.

The land of the free and the home of the brave is being represented by the timid, the cowardly, the corrupt, and the dishonest.

Surely Congress can demand more leadership, action, openness, and honesty than the bicycling president is providing.

If you agree, call your congressional representative and senators. Demand that they pass legislation to get these problems solved—even if it means Biden has to sign bills in his parlor in Delaware.