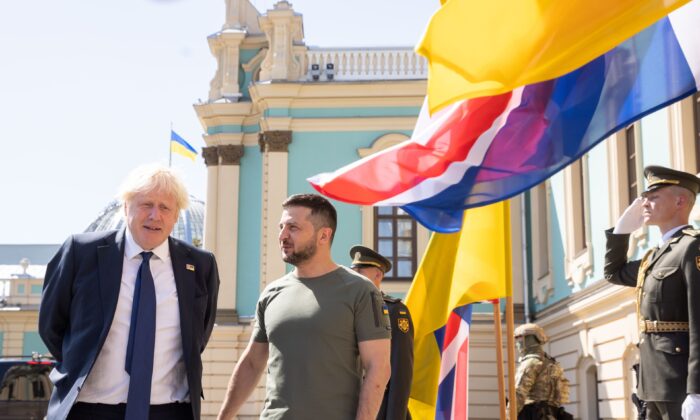 Ukraine “can and will win this war” with Russia, Boris Johnson said on a surprise visit to Kyiv on the country’s Independence Day, less than two weeks before he is set to step down as UK prime minister.

Aug. 24 is the 31st anniversary of Ukraine’s independence from the Soviet Union, and also marks six months since the Russian invasion began on Feb. 24.

On his last visit to Ukraine before he is set to leave office on Sept. 6, Johnson said the UK “will continue to stand with our Ukrainian friends.”

The prime minister said, “What happens in Ukraine matters to us all, which is why I am here today to deliver the message that the United Kingdom is with you and will be with you for the days and months ahead, and you can and will win.”

During the visit, he received Ukraine’s highest award that can be bestowed on foreign nationals—“The Order of Liberty”—for the UK’s support for Ukraine’s war effort.

The UK has been one of the staunchest supporters of Ukraine’s resistance against the Russian invasion.

Since the outbreak of war, the UK has provided Ukraine with £2.3 billion ($2.7 billion) worth of military support, more than any country other than the United States.

During his meeting with Ukrainian President Volodymyr Zelenskyy, Johnson outlined a further £54 million ($64 million) package of military aid, including 2,000 drones and loitering munitions.

The UK is also preparing to provide mine-hunting vehicles to operate off the coast, with Ukrainian personnel being trained in their use in UK waters in the coming weeks.

Johnson said the new support package “will give the brave and resilient Ukrainian Armed Forces another boost in capability, allowing them to continue to push back Russian forces and fight for their freedom.”

Meanwhile, Foreign Secretary Liz Truss, the frontrunner in the race to replace Johnson as Conservative Party leader and UK prime minister, promised Ukraine will “have no greater ally” than the UK if she is made prime minister.

Writing in The Daily Telegraph, Truss said she would declassify more intelligence to expose Russian “misinformation,” while also repeating a promise to increase defence spending to 3 percent of GDP by 2030.

Speaking to BBC Radio 4’s “Today” programme, Defence Secretary Ben Wallace claimed Russia is in a “very fragile position” at the moment, explaining its advance can be measured “in metres per week, not miles.”

On whether Ukraine is realistically in a position to retake the territory that Russia still holds, Wallace said, “I think Ukraine is getting itself into that position.”