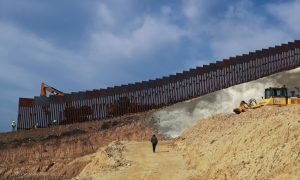 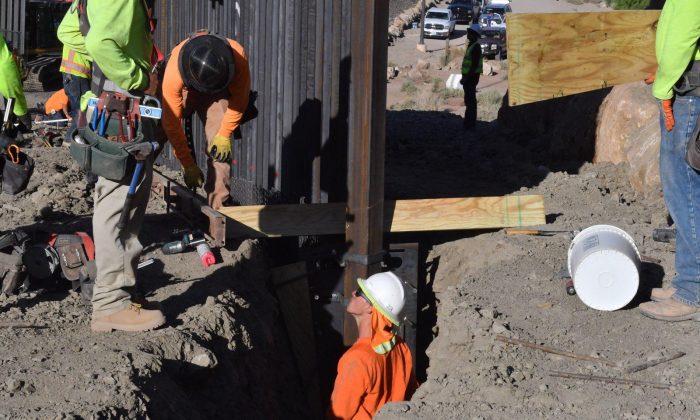 A mayor in New Mexico issued a cease-and-desist order to a company building a border wall on private land between the United States and Mexico but the nonprofit behind the wall said the section was set to be completed on May 30.

Javier Perea, the mayor of the City of Sunland Park, told CBS 4 on May 28, that the wall was in violation of city ordinance. He said an application filed by the owner of the property was incomplete, prompting the cease-and-desist order, and that walls can only be up to six feet tall.

According to documents filed by the American Eagle Brick Company, the owner of the land, and obtained by KVIA, the half-mile of wall was said to cost $5.8 million. Sunland Park officials declined to say which part of the application was missing.

Getting a tour from a member of “We Build the Wall” and he says they plan to be done with this section of the fence by Friday. #elpaso pic.twitter.com/D509tItp66

After the cease-and-desist order was issued on Tuesday, more than 2,500 phone calls came into the city from supporters of the wall.

The nonprofit behind the wall said the city did say it could build it.

Kolfage described the order as “Liberals trying to intimidate us! SOUND THE ALARM” and said the city had given them the green light to build.

WE BUILT THE WALL! Project 1 summary.

He said in an update on May 30 that the section of the wall was set to be completed by 10 a.m. on Thursday.

In a press release, We Build the Wall said the owner of the property was originally told by the U.S. Army Corps of Engineers that a wall would be too difficult to build on the mountainside, describing it as a “natural barrier,” but that his nonprofit and the contractor, Fisher Industries, was going to complete the wall by Thursday morning.

“Mt Cristo Rey is an important shrine to thousands of Americans from southern New Mexico and west Texas, as well as visitors from northern Chihuahua, and it’s a beautiful site,” Kolfage stated in the release. “However, it’s not the ‘natural barrier’ that it’s alleged to be, as I was able to roll across the border in my wheelchair with ease.”

Tommy Fisher, the CEO of Fisher Industries, had told 3 TV on Wednesday night that it would take approximately three more days to finish the wall.

Kolfage also accused the city of being paid by cartels. Perea, the mayor, admitted there had been corruption in the past but said there is not at present.

In a statement, New Mexico Gov. Michelle Grisham, a Democrat, said the section of the wall was inconsequential.

“A multi-faceted and strategic approach is required for establishing and enhancing border security as well as dealing with the humanitarian crisis on our southern border. No president, no federal administration has done enough on these fronts in recent decades, and certainly not in recent months,” she said.

“But to act as though throwing up a small section of wall on private land does anything to effectively secure our southern border from human- and drug-trafficking or address the humanitarian needs of the asylum seekers and local communities receiving them—that’s nonsense. It takes us farther away from where we all need to be.”