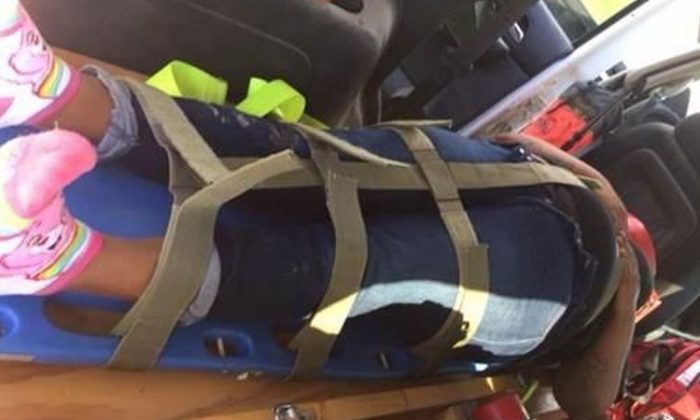 Border Patrol agents rescued a woman who said she was pregnant near the U.S.-Mexico border in Weslaco, Texas. Unknown assailants threw rocks at them. (U.S. Customs and Border Protection)
US News

U.S. Border Patrol agents said they were attacked with rocks while providing assistance to a woman who claimed to be pregnant, near the Progreso Port of Entry in Texas.

“As they got closer to the area, agents noticed two subjects on top of the bridge and a woman in distress at the base of the tree. The woman, a 25-year-old Mexican national, was complaining of back pain and claimed to be pregnant,” the Border Patrol said in a statement.

It happened as Border Patrol agents saw a group of illegal immigrants trying to use a tree to climb up the Progreso Port of Entry into the United States.

When they tried to give the woman medical attention, one of the others in the group began throwing rocks at the Border Patrol agents.

The agents were able to move the woman to a safe location. The assailants then fled back to Mexico, the agency said.

The woman still needs to be cleared by medical staff, and she will be processed by immigration officials, it noted.

Earlier this week, the agency said that agents near Edinburg, Texas, had rescued a 3-year-old separated from her mother by smugglers. The child had been abandoned in the Rio Grande river.

When agents responded to a report that a group was attempting to cross the border, they met a woman who claimed that her daughter was missing.

“She stated that the guide/smuggler crossed her into the US alone. Then, as the smuggler attempted to cross her daughter, she observed them both drifting down river as she lost sight of them,” the Border Patrol stated.

A National Guard helicopter and other units were mobilized to search for the child. They found the child walking on a road by the river and checked her for injuries before reuniting her with her mother.

It comes days after Border Patrol agents rescued 64 illegal immigrants in late June and early July. In one incident on June 30, a woman was arrested for attempting to smuggle 10 individuals in the sleeper cab of a tractor-trailer, according to Customs and Border Protection.