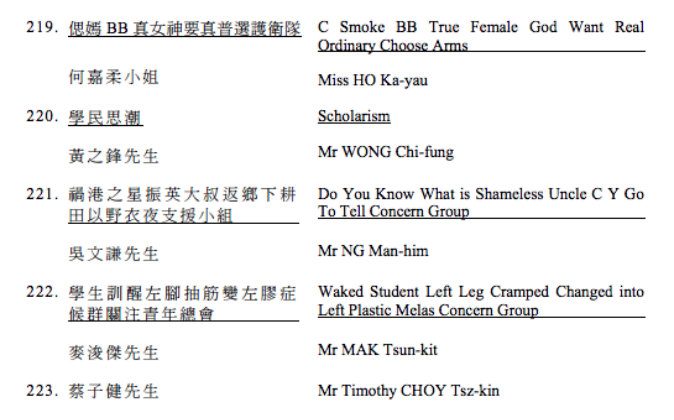 Think “Scholarism” is a cool name for a pro-democracy group? You ain’t seen nothing yet.

The Hong Kong government is meeting over two hundred individuals and groups on Saturday, Feb. 7 as part of a two-month long public consultations on political reform in the city.

In short, you will likely doze off before the list’s end.

But if you’re awake pass the number 200 mark, things get interesting really quickly.

In the last consultation session of the day, the Hong Kong government will hear the views of student group Scholarism’s famous leader, Joshua Wong, as well as representatives from “Booyarhism,” “The Alliance of Fighting for the Universal Suffrage Despite How the World Change,” “Hehehahahahahahahaha Alliance,” “Fight for Mud Mud Mud,” and possibly the most outlandish of all, “Waked Student Left Leg Cramped Changed into Left Plastic Melas Concern Group.”

These new pro-democracy groups—almost all have “genuine universal suffrage,” a popular Umbrella Movement protest slogan, in their Chinese names—have such creative handles that the teenage face of the 79-day long Occupy protests regrets attending the session as convener of Scholarism.

“Should have gone as convener of “‘Humanity Always Repeats the Same Mistakes’ Ray Lau Have You Met Amuro Ray Alliance,” said Joshua Wong in a Facebook post.

Wong is poking fun at government official Ray Lau, who’s hosting Saturday’s consultation, and referencing the lead character from Mobile Suit Gundam, a Japanese giant robot cartoon series the 18-year-old seems to have a penchant for.

The Hong Kong government is hoping to convince the public and pro-democracy lawmakers to accept the Chinese faux legislature’s political reform package. In August, the Standing Committee of the National People’s Congress (NPCSC) ruled that Hong Kong’s over five million eligible voters can elect their chief executive by a free vote, but only from a list of two or three candidates handpicked from a pro-Beijing nominating committee.

The NPCSC sparked the nearly three-month long Umbrella Movement street occupations, where student protesters held three areas of the city. The movement is widely regarded as a watershed for Hong Kong’s pro-democracy campaign as it helped heightened people’s civic awareness.

Despite the massive protests, the Hong Kong government is still backing Beijing’s plan in its public consultations. Pro-democracy lawmakers, who make up 40 percent of Hong Kong’s legislature, have vowed to vote down the NPCSC reform package. The election plan needs to be approved by a two-thirds majority before it can submitted to Beijing.

The comical names of the new pro-democracy groups are perhaps an attempt to recapture the youthful energy and political in-jokes that proliferated during the Umbrella Movement.

Here are some of the more interesting groups from the “Panel on Constitutional Affairs” list:

212. My Mum is not Good United (note: “Mum is not Good” references police chief Andy Tsang’s statement that officers treated protesters like a “caring mother” despite numerous instances of police brutality)

214. The Alliance of Fighting for the Universal Suffrage Despite How the World Change