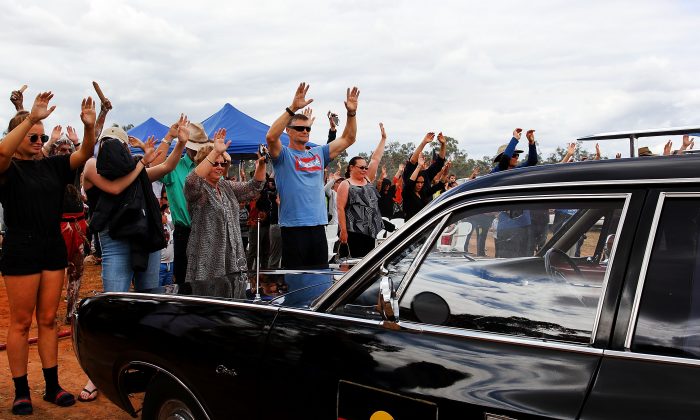 Local indigenous people and visitors raise their hands towards the sky to welcome Mungo Man back to country during a ceremony on Nov. 16, 2017 in Balranald, Australia. The ancestors of Australia's oldest human, the Mungo Man, and the traditional owners of the Willandra area in which his remains were found over 40 years ago, are on a journey to return the remains to country at Lake Mungo in southwestern New South Wales. The Mungo Man and 100 ancestors are being carried in an restored Aboriginal 'hearse' used in the 1970's and 80's and making long journey from the Australian National University in Canberra, to their final resting place with stops in Wagga Wagga, Hay and Balranald where traditional owners will hold ceremonies and pay respects. The decision to move the remains to the ANU in 1974 was unpopular with the Muthi Muthi, the Ngiyampaa and the Paakantyi people, the traditional owners and ancestors, who fought for 40 years until a decision was made in 2015 to repatriate the remains. (Lisa Maree Williams/Getty Images)
Australia

SYDNEY—The 40,000-year-old remains of an Aboriginal man that prompted a drastic rewrite of Australian history were returned to his ancestral homeland on Friday after four decades of examination in the country’s capital.

The discovery of “Mungo Man” in 1974, named after the dry outback lakebed where the fully intact skeleton was found, doubled the known length of humans’ presence on the continent from 20,000 to 40,000 years.

But the bones’ removal to Canberra for study, roughly 600 km (370 miles) east of Lake Mungo, had angered the indigenous community there.

“We’ve been waiting all those years to get him back and I’m so glad he is back, to put him in his resting place,” said Joan Slade, an elder of the Aboriginal Ngiyampaa people at a ceremony welcoming the remains back to her ancestral country.

The skeleton, along with 104 other remains, arrived in a black hearse with the black, yellow and red Aboriginal flag painted on its side.

A traditional smoking ceremony, with green gum-leaves burned over a small fire, welcomed the remains back to the red soil and saltbush scrub of Lake Mungo.

“This, today, is one of those catalytic moments…it makes us, the traditional owners, custodians of our culture,” said elder Michael Young.

“They will be kept in a secret, safe place so that we can pass on to the next generations the legacy that these people have given us.”

The Tirkandi Inaburra Indigenous dancers prepare to welcome Mungo Man back to country during a ceremony on Nov. 16, 2017, in Hay, Australia. (Lisa Maree Williams/Getty Images)

Though subsequent discoveries have pushed back even further the date of humans’ first arrival in Australia, the finding of Mungo Man was at the time a huge advance for understanding human history,

His burial, with limbs stretched out, hands crossed across his groin and covered in an ochre drawn from some 200 km away, helped prove the ancient age of Aboriginal civilization – the world’s oldest continuing culture – dating back around the time Neanderthals occupied Europe.

The Australian National University, whose researchers removed the remains, issued a formal apology when it turned the remains over to the region’s Aboriginal custodians in 2015.

“We recognise that the removal of these ancestral remains caused ongoing grief to your communities and we apologise unreservedly,” it said.

“While the research undertaken…contributed significantly to the understanding of the history of indigenous Australians, our research in the past has not always been undertaken with your full knowledge and support.”