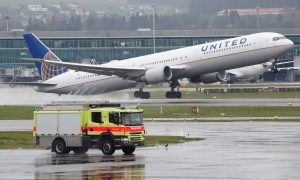 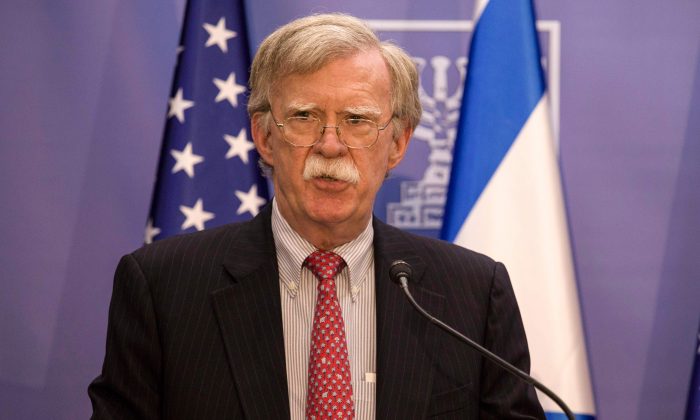 Bolton Warns Iran Not to Mistake US Prudence for Weakness

“Neither Iran nor any other hostile actor should mistake U.S. prudence and discretion for weakness,” Bolton said during a visit to Israel. “No one has granted them a hunting license in the Middle East.”

“Iran’s continued pursuit of nuclear weapons, its threats to exceed the limits set in the failed Iran nuclear deal in the coming days … are not signs of a nation seeking peace,” he said. “Sanctions are biting, and more added last night. Iran can never have nuclear weapons—not against the U.S.A. and not against the world.”

Tensions between Iran and the United States, along with its allies that include Saudi Arabia, have risen since Washington pulled out of a deal in 2018 between Iran and global powers that aimed to curb Tehran’s nuclear ambitions.

Iran said it may further scale back compliance with the nuclear deal unless European countries shield it from U.S. sanctions through a trade mechanism, the head of Tehran’s Strategic Council on Foreign Relations was quoted as saying on June 23.

“If Europeans don’t take measures within the 60-day deadline (announced by Iran in May), we will take new steps,” the semi-official news agency ISNA quoted Kamal Kharazi as saying.

In a June 23 NBC interview, Trump was asked if he felt pushed into the conflict with Iran by other U.S. officials. He said in response that there were both doves and hawks in his administration.

“I have some hawks. John Bolton is absolutely a hawk,” he said. “If it was up to him, he’d take on the whole world at one time.”

As Trump announced the upcoming sanctions—set to be imposed June 24—he also said he wants to make a deal to bolster Iran’s flagging economy, an apparent move to defuse tensions following the downing of an unmanned U.S. drone by the Islamic regime.

Vice President Mike Pence told CNN on June 23 that the administration remains doubtful that the drone attack was authorized “at the highest levels,” of Iran’s leadership.

On June 20, an Iranian missile destroyed a U.S. Global Hawk surveillance drone, an incident that Washington said happened in international airspace. Trump later said he had called off a retaliatory military strike at the last minute after being told it would kill 150 people, saying on Twitter that it “was not proportionate to shooting down an unmanned drone.”

Trump said on June 22 that military action is “always on the table” but noted that he’s open to reaching a deal with Iran. The president indicated his administration is taking a diplomatic path to add more pressure on Tehran.

Iran’s behavior in response to Trump’s upcoming sanctions will inform what action the United States will take, according to Rep. Mac Thornberry (R-Texas), when asked in a June 23 interview with ABC News whether the sanctions are a big enough retaliation.

“That’s going to really depend on the Iranians. This story is not over,” Thornberry said. “And the question is how do they respond to this relatively restrained response by President Trump.”

One Republican senator said he worries about Iran’s long history of stepping up aggression.

“I fear if Iran doesn’t have a firm set of boundaries drawn around its behavior, we’re going to see an attack on a U.S. ship or a U.S. manned aircraft,” Sen. Tom Cotton (R-Ark.) told “Fox News Sunday.”

Iran has continued its terror-related activities ever since it was first designated as a state sponsor of terrorism in 1984.

A senior Iranian military commander on June 23 threatened swift retaliation to any military action by the United States, after Trump’s announcement of further sanctions.

“If a conflict breaks out in the region, no country would be able to manage its scope and timing,” Major General Gholamali Rashid said, according to the semi-official news agency Fars.