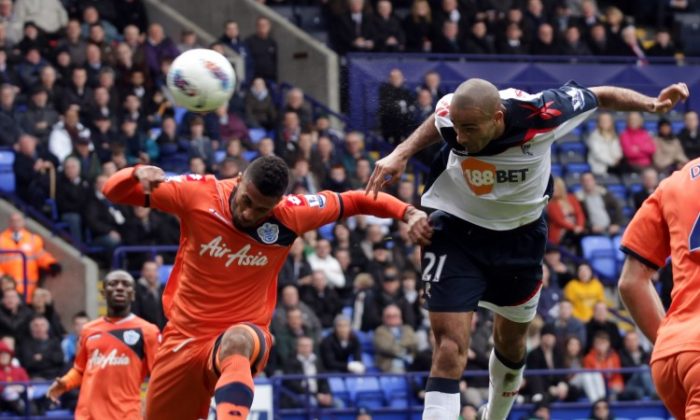 Rangers can consider themselves very unlucky as a first half header by Clint Hill crossed the goal line but was not given, simply because the referee was not in a position where he could make the call, and his assistant on the touchline was unsighted.

Prior to kickoff, Bolton’s 11th consecutive season in the Barclays Premier League found them languishing in 19th place with a meager 20 points and a wretched goal difference of -27. Interestingly, the Trotters have spent more seasons (73) in England’s top flight, without ever having won the title—more than any other team in the country. The club’s current predicament is a far cry from the heady days of 2005 when Sam Allardyce guided his side to a sixth place finish and qualification for the UEFA Cup.

In the early months of the Owen Coyle era, following the sacking of Gary Megson, Bolton were almost as successful and spent most of 2011 in the top 10. Then an excellent FA Cup run ended with an ignominious 5–0 semifinal defeat to Stoke City, and that began a terrible run of five consecutive defeats leading to a 14th place finish.

Bolton started this season with a 4–0 thumping of QPR, but then reverted to the form with which they had ended the previous campaign. Although they did manage to temporarily drag themselves clear of the relegation places in January, it was not long before they were back in the doldrums.

However, the Bolton fans had some cause for optimism as the teams emerged from the tunnel Saturday afternoon with Martin Petrov returning after a month out injured in place of Zat Knight, and both Kevin Davies and Ivan Klasnic fit enough to take their places on the substitutes’ bench.

Notwithstanding the arrival of manager Mark Hughes and several high profile signings, Queens Park Rangers were just three places and only two points better off than Bolton at the start of play, albeit with a much superior goal difference. Rangers’ priority is to avoid the dreaded drop back down to the Championship after only a single season in the top flight. The West London club was boosted by the return of both Samba Diakite and Djibril Cisse from suspension.

Bolton started the more confident of the two sides and made most of the running for the first quarter of an hour or so; yet it was the visitors that came closest to a goal when Bobby Zamora hit the crossbar from a tight angle after being put through by a well-timed Cisse chip.

That was on the 18-minute mark, but then shortly afterwards came the most controversial incident of the game. Joey Barton’s in-swinging corner from the right was met firmly by the head of Clint Hill.

For those watching on television there was no doubt that Bolton keeper Adam Bogdan scooped the ball back from well over the line, onto the underside of the bar and out to safety. Notwithstanding the heartfelt pleadings of the Rangers players, the goal was not given, since neither referee Martin Atkinson nor his assistants had a view of the incident that would have allowed them to make a conclusive decision.

“A lot of the lads said it was in,” said Bolton’s American defender Tim Ream in a post-game interview with ESPN. “It definitely looked over the line.”

It is almost certain that goal-line technology will be given a trial early next season. QPR fans will not be the only ones saying that it is long overdue.

This looked like it could really be Bolton’s day, when on 37 minutes an excellent cross from former New York Red Bull Ream found Darren Pratley unmarked and the midfielder headed in his first Premier League goal. When the ball was played in, a couple of Bolton players were in offside positions, but the flag stayed down as they were deemed not to be interfering with play.

Rangers had one last chance to get on the score sheet before the break, but Bogdan saved well with his feet to deny Nedum Onuoha in first half stoppage time. It was all rather harsh on Mark Hughes’s team, who deserved to be at least on level terms going in at the half-time interval.

Rangers Fight Back but Bolton Wins the Day

The visitors finally received some reward for their endeavors just three minutes after the break when Cisse raced clear of the Bolton defense, received the ball and finished clinically with the outside of his right boot. He was clearly offside by a half body length, but the near side referee’s assistant failed to make the call. Perhaps two wrongs do make a right.

“I definitely thought he was offside,” said Ream.

As the match entered the final 10 minutes, some last ditch defending was required of the home side to keep the scores level. Having withstood the onslaught, they went in search of a winner themselves and it was the two substitutes that gave them the edge. First, Chris Eagles had a shot deflected to safety on 85 minutes, then a minute later Ivan Klasnic nipped in to grab the winner with the sort of composure that his team have sorely missed in recent weeks.

“Klasnic found a little hole and put in a good finish,” said Ream.

Rangers had an injury time penalty appeal turned down and so had nothing at all to show for a hard afternoon’s work. They will be occupying one of the relegation places at the end of this weekend regardless of what happens in the other fixtures. By contrast, Bolton will be hoping that these precious three points will be the start of a decent run that will preserve the clubs top flight status for another season.

“That’s definitely the most important game of the year so far,” said Ream. “Getting out of the bottom three, it is a good spot to be in now.”