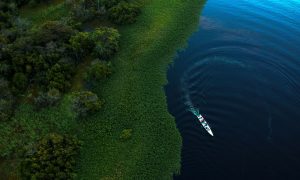 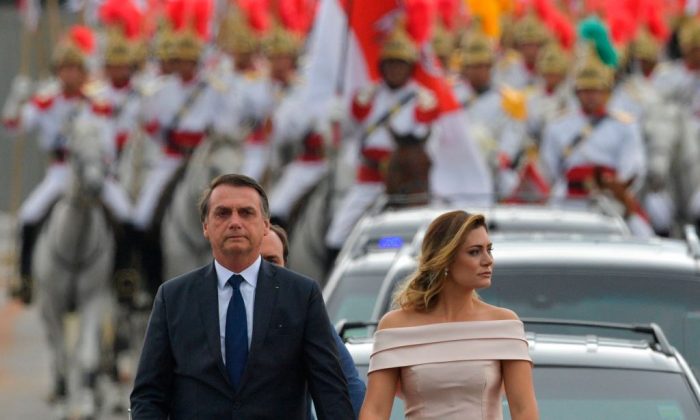 The presidential convoy, led by Brazil's President-elect Jair Bolsonaro (L) and his wife Michelle Bolsonaro in a Rolls Royce, heads to the National Congress for his swearing-in ceremony, in Brasilia on Jan.1, 2019. (Carl De Souza/AFP/Getty Images)
Americas

Bolsonaro Vows to ‘Tackle the Marxist Garbage’ in Brazil’s Schools

In a pair of his first policy-oriented messages as the president of Brazil, Jair Bolsonaro said his administration will target the “Marxist garbage” within his country’s education system.

Bolsonaro issued the messages one day after declaring in his inaugural speech that his election victory liberated Brazil from “socialism and political correctness.”

“One of our strategies to get Brazil to climb from the lowest spots of the educational rankings is to tackle the Marxist garbage in our schools head-on,” Bolsonaro wrote on Twitter. “We shall succeed in forming citizens and not political militants.”

In a follow-up message, he wrote that his administration will focus on the opposite of the previous government, “which purposely invested in the formation of slave minds of the ideas of socialist domination.”

Bolsonaro’s decision to tackle the system likely isn’t accidental. The international communist movement selected Brazil’s education system as the primary target for infiltrating the nation, according to Jeff Nyquist, an author who has interviewed experts on the issue in Brazil and the United States.

“It’s even deeper than in the United States and that’s saying a lot,” Nyquist said, referring to the socialist penetration of Brazil’s education system. “Some of the same programs that the far-left has introduced into the U.S. education system, they’ve introduced in Brazil. They went for education first there.”

In November, Bolsonaro appointed Ricardo Vélez-Rodriguez, a self-described anti-communist, to lead Brazil’s education ministry. Weeks before being appointed, Vélez-Rodriguez wrote in a blog that Brazilians have become “hostages of an education system that indoctrinates students into scientism and Marxism.”

Vélez-Rodriguez views Brazil’s conservative Schools Without Political Parties movement as part of the solution. A bill with a similar title has been in Brazil’s Congress since 2014. The law would forbid certain topics–including politics, sexuality, and gender theory–from classroom discussion.

Vélez-Rodriguez was endorsed by Olavo de Carvalho, a U.S.-based Brazilian conservative, whose work was among the four books on Bolsonaro’s desk during his election victory speech, according to The Nation.

In an interview with The Epoch Times, de Carvalho said that Brazil’s ruling Worker’s Party is “the Communist Party.” The communists’ control in Brazil extends well beyond the school system, de Carvalho noted.

According to Nyquist, loosening communism’s grip on Brazil’s education system will be easier to carry out than in the United States. In Brazil, the government is much more centralized, which will allow Bolsonaro to swiftly affect significant change. In the United States, the public school system is controlled largely at the state and local level, with the federal Department of Education having little overall influence, Nyquist added.

President Donald Trump wrote on Twitter on Jan. 1 that Bolsonaro’s inauguration speech was “great,” adding that “the U.S.A. is with you!”