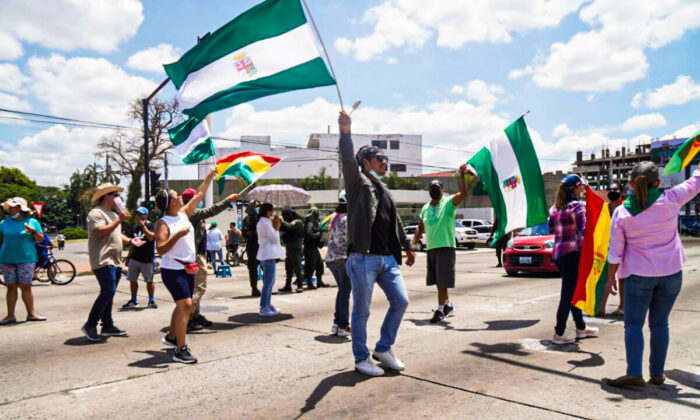 SANTA CRUZ, Bolivia—Trade union leaders and civic leaders in the Bolivian city of Santa Cruz called upon businesses and transportation workers to unite in what they’re calling an “indefinite civil strike” in response to a new law approved by the nation’s legislature that some have called a “gateway to communism.”

The strike against the socialist party and government of President Luis Arce began on Nov. 8. The action was in response to a new law, number 386, officially titled the “National Strategy to Fight Against Legitimizing Illicit Profits and the Financing of Terrorism.”

The law allows the nation’s president to regulate the aspects of the nation’s financial system strictly by decree. Sen. Rodrigo Paz Pereira said the law has created a “tripod of control and power over the country.”

The law centralizes broad swaths of Bolivia’s power structure and allows the government access to private bank accounts, leaving many Bolivians worried about the future of their money and businesses.

“This law is obscene and must be reversed,” Ronnie Marancenbaum, a civil engineer and protest organizer, told The Epoch Times.

While manning one of the hundreds of improvised road blockades throughout the city meant to bring the economy to a halt, Marancenbaum said this law is a slippery slope that will lead the nation down a dangerous path: “They’re trying to take away private property and our freedom.”

He said the new law will also allow the government to seize bank assets if they even suspect someone of doing something illegal.

“The government is trying to put this country into a communist system. It’s a gateway to communism,” Marancenbaum said.

“We don’t agree with what the government is doing,” a man who asked to be called Monje, for fear of police reprisals, told The Epoch Times.

Monje said the new law would allow the government to bypass the courts when making legal decisions. “You could be jailed without a complete legal process. This law must be abolished,” he said.

The call to strike at a national level has found support in other cities and departments, with demonstrations against socialist party President Arce seen in La Paz and Potosí.

Arce responded with his thoughts about the national strike via Twitter, “We have been rebuilding the economy in unity for a year and the right-wing is afraid of that unity of the Bolivian people.”

Back in the streets of Santa Cruz, hundreds of people continued to hold the road blockades on a major highway through the night of Nov. 8. Among them was university student Adriana Lopez, who says love is the reason she’s protesting. “I’m here because I love my country. I’m young, but I want a great future here in Bolivia.”

Diego Infante, a business owner in Santa Cruz, said the police have already responded with aggression toward some of the demonstrators. “Police shouldn’t be like this, they should recognize the right of people to protest peacefully, which is in our constitution,” he told The Epoch Times.

On Nov. 9, police attacked demonstrators in the neighborhood of Los Lotes in Santa Cruz with water cannons and tear gas, arresting several protesters in the process for disrupting the flow of traffic with roadblocks.

“The Bolivian constitution allows us to do this [protest], but in Venezuela what we’re doing is illegal,” Monje said.

“They’re trying to turn this into Venezuela.”