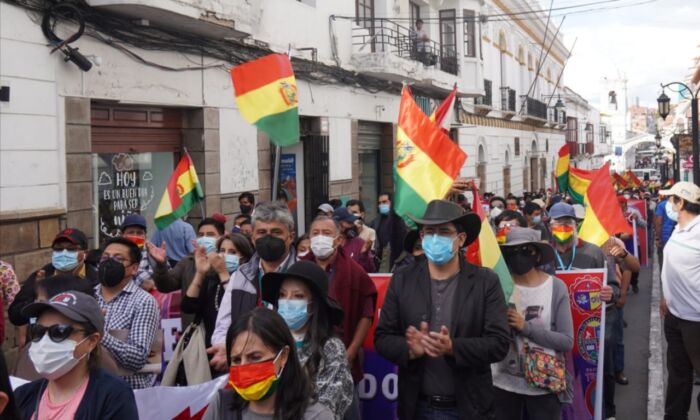 Protesters march in the streets of Sucre, Bolivia, on Nov. 12, 2021 (Autumn Spredemann / The Epoch Times)
Americas

Bolivian President Luis Arce has announced the repeal of a controversial law that had sparked large public demonstrations and a voluntary economic shutdown since Nov. 8.

On paper, the law targeted illicit earnings and the financing of terrorism by allowing the government access to people’s private bank information. It also granted the president the ability to rule by decree.

The measure was very unpopular and was nicknamed the “communist law” by locals. Its implementation led to a nationwide strike.

On the evening of Nov. 13, Arce announced that he would be revoking the law.

The previous day, thousands of demonstrators marched through the streets of Sucre, Bolivia, chanting “this is Bolivia, not Venezuela,” pledging to block all transportation routes in the department capital, and adding pressure to the existing economic shutdowns seen in the Bolivian cities of Santa Cruz, Potosi, La Paz, Oruro, and Cochabamba.

“This is what socialism tries to do. They want to take everything from us, [but] we won’t let them,” Alejandra Ortiz, one of the protesters in Sucre, told The Epoch Times.

According to Sucre newspaper Correo del Sur, transportation union workers in Sucre intended to cut road access from the city to other parts of the department in Chuquisaca, starting on Nov. 15.

In Sucre’s historic square of Plaza 25 de Mayo, protest leaders and union heads gave speeches to the gathered masses on Nov. 12, which were met with a unanimous denouncement of Arce’s law, while anti-socialist rhetoric was directed at the Movement for Socialism (MAS) party.

“There’s a real tension here [in Bolivia] we haven’t seen since the fraud in 2019,” Oscar Linares, another Sucre protester, told The Epoch Times.

Linares was referring to the last nationwide civil strike, which occurred after a contested presidential election in October 2019 in which Evo Morales, former president of Bolivia and leader of the MAS party, stepped down from office after weeks of citizen-led road closures and total economic shutdown.

“We’re not afraid to go to those measures again if needed,” Linares said.

In Potosi, one demonstrator died on the evening of Nov. 9 during a confrontation between protesters and defenders of the MAS party, who attempted to dismantle road blockades that were set up by strike supporters.

Local journalists clashed with police in Oruro on Nov. 9 over the latter’s refusal to allow the press to enter Plaza 10 de Febrero as protest activities were taking place.

There’s also widespread support for the national strike in the administrative capital of La Paz and in Cochabamba, with additional confrontations between demonstrators and the police recorded in Cochabamba on Nov. 9.

Despite Arce’s announcement of the repeal of his “communist law,” many protesters in the cities of Santa Cruz, Sucre, and Cochabamba remain skeptical and continue to keep businesses closed and hold road blockades until the legislative assembly meets to make the cancellation of the law official.

“This approval should not last long because we understand that the repeal [of the law] should be unanimous,” said Freddy Mamani, president of the Chamber of Deputies.

In his address to the nation on Nov. 13, Arce said he heard the demands of the Bolivian people and decided to repeal the law, so the paralysis of the economy could come to an end.

He also described what he called “interests beyond the needs of social groups” while hinting at a larger plot meant to overthrow his administration, particularly in the cities of Santa Cruz and Potosi.

Protesters in Santa Cruz maintain the holding pattern as the strike continues for its eighth day.

“This isn’t over until the law is repealed on paper,” Santa Cruz resident and protester Antonio Flores told The Epoch Times.