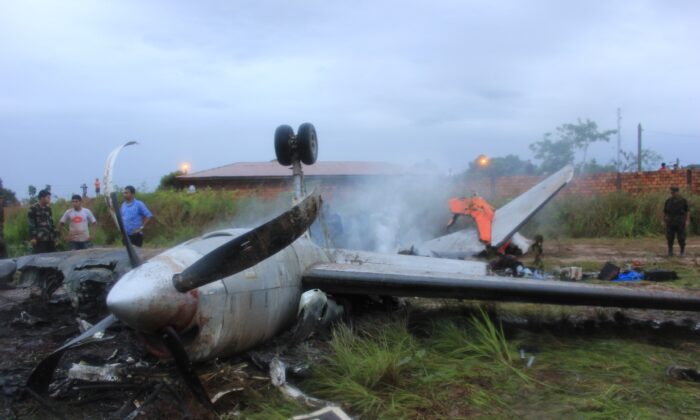 The wreckage of an Aerocon airlines Fairchild Metro 23 turboprop aircraft that crashed on landing in Riberalta, northern Bolivia, near the Brazilian border, leaving eight passengers dead and 10 injured, on Nov. 3, 2013. (Photo STR/AFP via Getty Images)
International

LA PAZ—A Bolivian military plane crashed on May 2, killing two crew members and four Spanish citizens who were being transferred before a planned repatriation amid the CCP virus outbreak, the country’s Air Force said.

The crash occurred near the southeastern city of Trinidad, from where the passengers were being taken to the larger transport hub of Santa Cruz, the statement said. Bolivia has closed its borders to slow the spread of the pandemic.

Bolivian authorities have set up a panel to investigate the crash and file a report on the incident within eight days, the air force said. It added the light aircraft, a Beechcraft Baron B-55, had crashed early in the afternoon.

Preliminary findings showed that the plane reported that it planned to return to the airport in Trinidad 12 minutes after take-off due to engine failure. Contact with the aircraft was then lost.