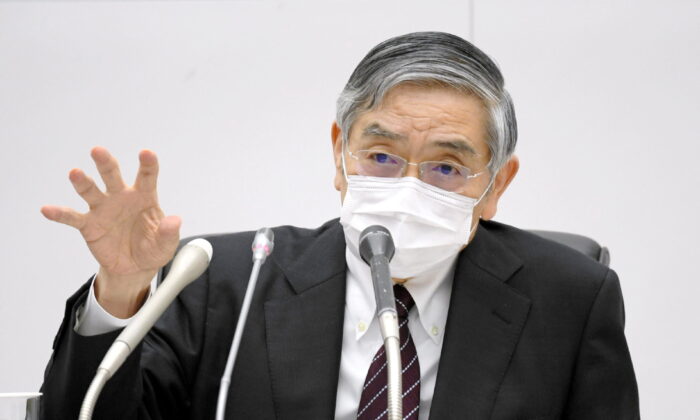 TOKYO—Bank of Japan Governor Haruhiko Kuroda said on Monday the yen’s recent moves had been “quite sharp” and could hurt companies’ business plans, offering his strongest warning to date of the risks stemming from the currency’s depreciation.

Kuroda said there was no change in his assessment that, overall, a weak yen was good for the economy since it boosts the value of profits Japanese firms earn overseas.

“The recent falls in the yen, which lost about 10 yen to the dollar in about a month, is quite sharp and could make it hard for companies to set business plans,” Kuroda told parliament.

“In that sense, we need to take into account the negative effect” of a weak yen, he said.

Traders bought the yen on the comment, helping push the dollar down by 0.2 percent to 126.25 yen on Monday.

Kuroda, however, repeated his view the BOJ must maintain its massive stimulus programme to support a fragile economic recovery.

The yen has slid to two-decade lows against the dollar on prospects of widening U.S.-Japan interest rate differentials, with the BOJ seen maintaining ultra-low interest rates even as the Federal Reserve plans steady rate hikes.

A former currency diplomat, Kuroda has consistently preached the merits of a weak yen despite growing concern among lawmakers that sharper yen falls may hurt the economy by inflating already rising import costs for fuel and food.

His latest remarks are closer to those of Finance Minister Shunichi Suzuki, who on Monday repeated a warning he made last week that recent yen falls could be bad for the economy.

“In a situation like now when companies have yet to sufficiently raise prices and wages, a weak yen isn’t desirable,” Suzuki said. “In fact, it’s a bad yen decline.”

Suzuki declined to comment when asked whether Tokyo was ready to intervene in the currency market to stem yen declines.

Even Masakazu Tokura, who heads Japan’s biggest business lobby, Keidanren long considered a fan of a weak yen, said a shift of production overseas among Japanese firms when the yen was strong in the past had somewhat weakened the benefits of a weaker currency on exports, while boosting energy import costs.

“In the past when the yen weakened, trade balance, current account, and the economy were all good,” Tokura told reporters. “It’s no longer that simple.”

Tokura also said it was premature for the central bank to debate tweaking monetary policy to influence currency moves.

Takeshi Minami, chief economist at Norinchukin Research Institute, said: “Kuroda may have aligned his view a bit closer to that of the finance minister, to avoid giving markets the impression the two aren’t seeing eye to eye on this issue.”

“But I don’t think the BOJ will do something to influence currency rates because that’s something beyond its mandate.”