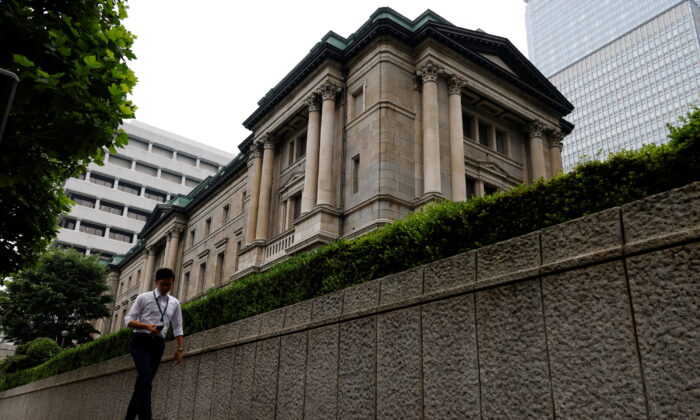 TOKYO—The Bank of Japan projected inflation would exceed its target this year in fresh forecasts issued on Thursday, but maintained ultra-low interest rates and signaled its resolve to remain an outlier in a wave of global central banks’ policy tightening.

BOJ Governor Haruhiko Kuroda brushed aside the chance of near-term policy tightening, saying he had “absolutely no plan” to raise interest rates or hike an implicit 0.25 percent cap set for the bank’s 10-year bond yield target.

“The economy is in the midst of recovering from the pandemic. Japan’s worsening terms of trade are also leading to an outflow of income,” Kuroda told a news conference.

“As such, we must continue with our easy policy to ensure rising corporate profits lead to moderate wage and price growth,” he said.

As widely expected, the BOJ maintained its -0.1 percent target for short-term rates and that of 10-year bond yields around 0 percent.

The BOJ’s dovish language stands out in a recent flurry of central bank interest rate hikes to combat soaring inflation.

While rising fuel and commodity costs have pushed Japan’s inflation above the BOJ’s 2 percent target, it has repeatedly said it was in no rush to withdraw stimulus as slowing global growth clouds the outlook for the still-weak economy.

“Uncertainty surrounding Japan’s economy is very high. We must be vigilant to financial and currency market moves, as well as their impact on the economy and prices,” the BOJ said in a quarterly report issued after the decision.

Underscoring its alarm over recent sharp yen falls, the BOJ included in the report a rare warning that “sharp volatility” in the currency market was among the risks to Japan’s economy.

But the BOJ cut this fiscal year’s growth forecast to 2.4 percent from 2.9 percent and warned of the potential blow from lingering supply constraints, rising commodity prices, and the COVID-19 pandemic.

Nodding to a wave of companies raising prices, however, the BOJ said inflation expectations were heightening and likely to rise further including through wage hikes.

In a statement released after the decision, the BOJ left unchanged a pledge to ramp up stimulus if needed and to keep interest rates at “current or lower” levels to support growth.

Swimming against the global tide of monetary tightening, however, is not without cost. The policy divergence has pushed the Japanese yen to 24-year lows, hurting households and retailers by boosting already surging import costs.

While warning that recent sharp yen falls were “undesirable,” Kuroda ruled out the possibility of using rate hikes to slow the currency’s slide.

“I don’t think a small rate hike could stop yen falls,” Kuroda said. “If we were to stop yen falls with rate hikes, we would have to raise rates a lot. That would inflict huge damage on the economy,” he added.

Kuroda also described the BOJ’s huge bond buying in June as a temporary but necessary step to defend its yield cap against speculative trading.

Recent BOJ data showed the central bank was forced to gobble up a record 16 trillion yen ($116 billion) worth of Japanese government bonds (JGB) in June to defend its 0.25 percent yield cap.

The aggressive buying pushed the BOJ’s ownership of the bond market past 50 percent, backtracking on past efforts to gradually taper its huge balance sheet and causing strains in the futures market.

“Allowing interest rates to rise above our target, just for the sake of protecting market function, would run counter to our objective of keeping monetary policy loose,” Kuroda said.