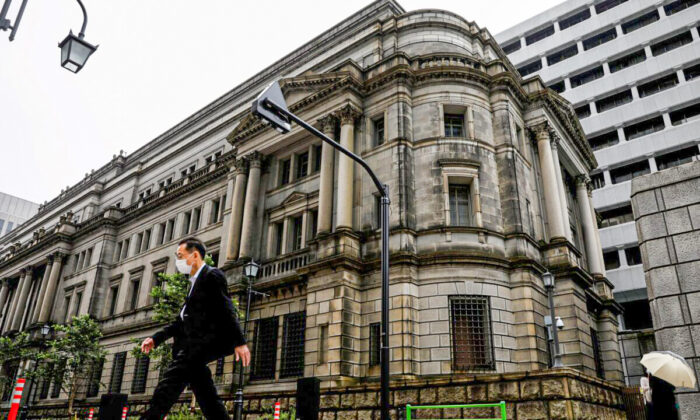 A man wearing a protective mask walks past the headquarters of the Bank of Japan amid the coronavirus disease (COVID-19) outbreak in Tokyo, Japan, on May 22, 2020. (Kim Kyung-Hoon/Reuters)
Economy

TOKYO—Some Bank of Japan policymakers saw consumer inflation briefly accelerating towards their 2 percent target as price pressures build up on changing corporate price-setting behavior, a summary of opinions at the bank’s January meeting showed on Wednesday.

Many board members, however, stressed the need to maintain an ultra-loose monetary policy to support a fragile economy facing fresh risks from a spike in Omicron coronavirus cases, the summary showed.

“There’s a chance year-on-year growth in consumer inflation may briefly approach 2%. If that happens, what’s important is to look at facts behind the rise and whether they’re sustainable,” one of the BOJ’s nine board members was quoted as saying.

“Consumer inflation may temporarily reach levels of around 1.5% in the first half of 2022. Whether that momentum is sustained enough for inflation to stably approach the BOJ’s 2% target would depend on wage and inflation expectations—or in sum the strength of demand,” a second opinion said.

At the January meeting, the BOJ raised its price forecasts but said it was in no rush to change its ultra-loose policy with inflation still distant from its target.

Japan has not been immune to impact of global commodity inflation with wholesale prices rising at a record pace.

But decades of low inflation have made many Japanese firms cautious of raising prices for fear of scaring away consumers, and instead have absorbed costs by streamlining operations.

Some BOJ policymakers saw signs of change and pointed to an increasing number of firms passing on higher costs to consumers, the January meeting summary showed.

“Many companies are now having to drop their traditional view that prices will keep falling, and change the way they set prices,” a third opinion showed.

Others, however, were skeptical that inflation will sustainably accelerate towards the BOJ’s target. “It will be difficult to achieve the BOJ’s price target by the end of fiscal 2023,” the summary quoted one board member as saying.

Japan’s core consumer prices rose 0.5 percent in December from a year earlier, well below the BOJ’s target but hovering around a nearly two-year high in a sign of broadening inflationary pressure from rising fuel and raw material costs.

Some analysts expect consumer inflation to approach 2 percent when a drag from cellphone fee cuts ends in April, piling pressure on policymakers to seek ways to push up wages to make up for households’ rising cost of living.