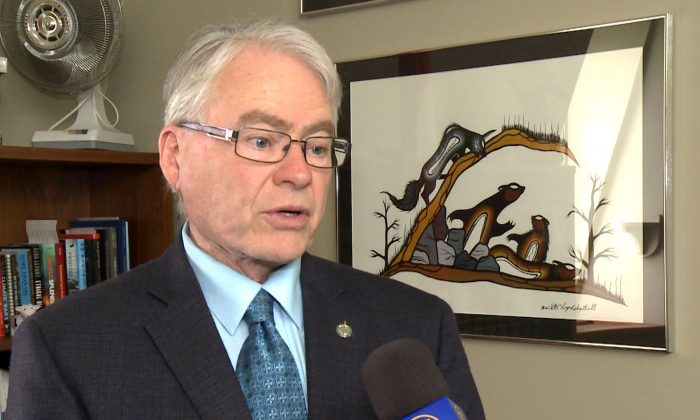 More than 10 MPs have confirmed receiving fraudulent emails from supposed Falun Gong adherents earlier this month after an event on Parliament Hill celebrating the 23rd anniversary since the traditional Chinese meditation practice was introduced to the public.

Fifteen MPs spoke at the event, which drew 600 people.

Deputy Green Party Leader Bruce Hyer was unable to attend the event, and a few days later received an email calling him “stupid” to “have missed the last chance to be saved” by not attending.

“Waiting for you will be a THOROUGH ELIMINATION!” the email said.

But Hyer, who came to know the Falun Gong (aka Falun Dafa) community a few years ago and has spoken at a number of the group’s rallies on Parliament Hill, was immediately suspicious.

“I scratched my head and said, ‘This doesn’t seem right.’ Many of the MPs on the Hill got emails supposedly from Falun Gong, saying some nasty things and threatening things. It didn’t make sense to me, and right away I assumed that it is probably true that those emails came from someplace else,” he said.

I don’t like bullies, and I will never, never cave in to bullies.
— Deputy Green Party Leader Bruce Hyer

Hyer suspects the Chinese communist regime—which in 1999 launched a brutal campaign of persecution against Falun Gong adherents that continues today—is behind the fraudulent emails.

“I don’t believe that the Falun Dafa, who believe in peace, in truthfulness, compassion, and tolerance, are going to threaten MPs. So it seemed probable to me that the Communist Party of China or the Party supporters are doing this to discredit Falun Dafa,” he said.

Grace Wollensak of the Falun Dafa Association of Canada got wind of the bogus emails and immediately alerted MPs that the emails were not from Falun Gong practitioners but from Chinese agents.

Wollensak said more than 10 MPs’ offices forwarded to her threatening emails they received from people pretending to be Falun Gong practitioners, and noted that she had reported the incidents to the Ottawa police’s hate crimes unit.

Around the same time, similar emails were sent to several MPs in Australia, Wollensak said. Such emails have also been sent in the past, she noted in an email to Canadian MPs.

“Upon our investigations over the past decade we have found similar emails being sent to other government officials in countries around the world. Many emails have been tracked as coming from Mainland China,” Wollensak wrote.

“These fraudulent emails are part of a broad campaign of misinformation, cyber attacks, and online espionage carried out by Chinese agents against Falun Gong practitioners outside China.”

In 2011, the Epoch Times reported that someone had used a Falun Gong practitioner’s name to send bizzarre emails to NDP human rights critic Wayne Marston and a number of other MPs. The IP address for the emails originated in Hebei Province, China.

Hyer, however, says the emails weren’t very convincing, and he wasn’t intimidated by the one he received.

“Those emails were not subtle, they were not sophisticated. It wasn’t a very good job, so I don’t think most of us believe them,” he said.

“I don’t like bullies, and I will never, never cave in to bullies,” he adds. “I like the brain, the heart, and the backbone of the people in Falun Dafa, and I will continue to support them.”