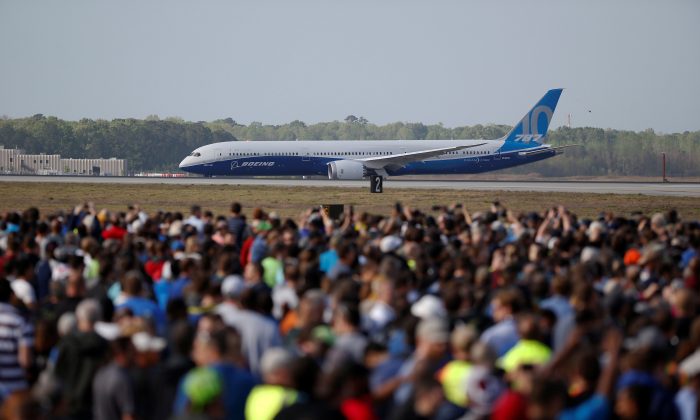 NORTH CHARLESTON, S.C.—Boeing Co.’s newest and largest Dreamliner model, the 787-10, successfully made its first flight on Friday, kicking off a test program for the high-tech jet.

The plane, which sells for $312.8 million at list price and rounds out a family of three carbon-fiber composite Dreamliners, flew well, the pilots said.

“We had a great flight,” Captain Tim Berg said at a news conference after the flight. The plane “performed exactly like we thought it would.”

The flight was one of three initial voyages on Friday, joining the Airbus A319neo jetliner and the Antonov An-132D, a light turboprop military transport developed with Saudi Arabia.

Boeing’s 787-10 is being built at Boeing’s factory in North Charleston, South Carolina, due to its large size. The facility is Boeing’s only jetliner assembly factory outside of Washington state and, in contrast to the others, is not unionized.

Last month, the new plane provided a dramatic backdrop for President Donald Trump’s visit to the Boeing factory, where he promised to boost U.S. manufacturing and punish companies for moving jobs overseas.

Companies in Japan, China, Italy, Sweden, France, and Britain produce many of the 787’s major components, such as wings, fuselage sections and the rudder. Airlines can choose engines from General Electric Co. of the United States, or Britain’s Rolls-Royce Holdings Plc.

The 787 has been a top seller, with 1,200 firm orders as airlines use it to open new routes between smaller cities that can be profitable with the fuel-efficient 787.

Airbus competes against the 787-10 with its A330neo, a remake of its older, aluminum-hulled A330 equipped with fuel-efficient engines. Both jets are optimized for shorter flights compared with other mid-sized, twin-aisle planes. After brisk initial sales, orders for both have slowed, with Airbus selling just over 220 of its A330neo.